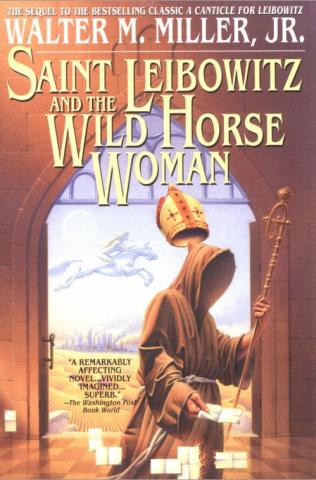 It has been nearly forty years since Walter M. Miller, Jr., shocked and dazzled readers with his provocative bestseller and enduring classic, Now, in one of the most eagerly awaited publishing events of our time, here is Miller’s masterpiece, an epic intellectual and emotional tour de force that will stand beside 1984, and

In a world struggling to transcend a terrifying legacy of darkness—a world torn between love and violence, good and evil—one man undertakes an odyssey of adventure and discovery that promises to alter not only his destiny but the destiny of humankind as well….

Millennia have passed since the Flame Deluge, yet society remains fragmented, pockets of civilization besieged by barbarians. The Church is in turmoil, the exiled papacy struggling to survive in its Rocky Mountain refuge. To the south, tyranny is on the march. Imperial Texark troops, bent on conquest, are headed north into the lands of the nomads, spreading terror in their wake.

Meanwhile, isolated in Leibowitz Abbey, Brother Blacktooth St. George suffers a crisis of faith. Torn between his vows and his Nomad upbringing, between the Holy Virgin and visions of the Wild Horse Woman of his people, he stands at the brink of disgrace and expulsion from his order. But he is offered an escape—of sorts: a new assignment as a translator for Cardinal Brownpony, which will take him to the contentious election of a new pope and then on a pilgrimage to the city of New Rome. Journeying across a continent divided by nature, politics, and war, Blacktooth is drawn into Brownpony’s intrigues and conspiracies. He bears witness to rebellion, assassination, and human sacrifice. And he is introduced to the sins that monastery life has long held at bay.

This introduction comes in the form of Ædrea, a beautiful but forbidden “genny” living among the deformed and mutant castouts in Texark’s most hostile terrain. As Blacktooth encounters her again and again on his travels—in the flesh, in rumors of miraculous deeds, and in the delirium of fever—he begins to wonder if Ædrea is a she-devil, the Holy Mother, or the Wild Horse Woman herself.

Picaresque and passionate, magnificent, dark, and compellingly real, is a brutal, brilliant, thrilling tale of mystery, mysticism, and divine madness, a classic that will long endure in every reader’s memory.