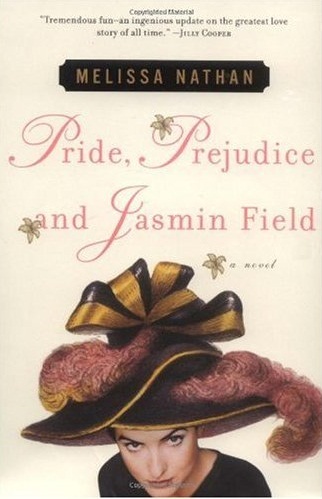 Pride Prejudice and Jasmine Field
As the title suggests, this is a modern and witty retelling of Pride and Prejudice. Jasmin Field, a columnist for a woman's magazine, is invited to audition for a charity production of the Austen novel, which is to be directed by the Oscar-winning actor Harry Noble. Jasmin sees this as fodder for her column but is selected for the lead role of Lizzie Bennet instead, even though the haughty Noble calls her "the ugly sister" after her beautiful sister, George, an actual actress, also auditions. Soon the lives and interactions of the cast members begin to resemble the characters they portray. Everyone swoons over the famous Noble except for Jasmin, who considers him an aloof, unfeeling egotist, which is his cue for becoming besotted with her. All the elements of the original story are here, cleverly molded to fit modern characters and situations involving career women and the contemporary arena for scandals: the tabloids. Nathan succeeds admirably in paying homage to a classic with her delightful tale.