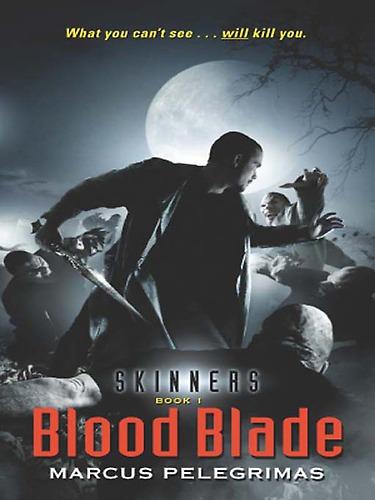 Blood Blade
After narrowly surviving a bizarre animal attack while on vacation in the wilds of British Columbia, urbanite Cole Wickstrom is introduced to the mysterious world of werewolves, vampires, and other creatures, who are hunted by a loose-knit band of humans called Skinners. Lost and pursued by werewolves in the woods, Cole is saved by a skinner named Paige, who teaches him the ways of the supernatural. Cole realizes that the Skinners are dwindling in numbers and losing a fight against the supernatural creatures that could leak over into the regular human world at any time. Meanwhile the vampire Misonyk, who has an old grudge against the Skinners, has convinced another very powerful creature to fight for him.The creature is very strong, very dangerous and insane. Events set into motion by Misonyk and his creature could very well pave the way for the most powerful breed of werewolves to come forward and reclaim their territory. Cole takes a liking to Paige and cannot just leave her when this vampire and his companion begin their own killing spree. Eventually, Paige convinces Cole to join up with the Skinners and train to become one of them. Cole (and the reader) are shown that the Skinners are more than just hunters, but have their own history as well as a special connection to the supernatural. 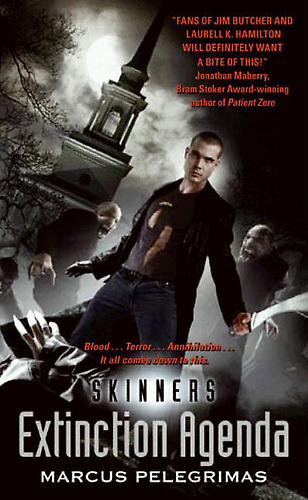 Extinction Agenda
The human race is under siege—with shapeshifters, vampires, and half-blood werewolves freely prowling the streets of the world’s cities …and Full Bloods about to descend en masse from out of the dark wilderness. The police and the military are helpless, and only the Skinners can forestall the tactical nuke strikes the Army has planned as a last resort. Skinners, partners, lovers, Paige Strobel and Cole Warnecki know Armageddon is at hand, and seek a union with the mysterious European blood hunters, the Gypsy Amriany, as a final, desperate means to preventing the monster apocalypse. But power-mad traitors from the ranks of their own kind could doom humanity’s valiant efforts to survive. And the only possible outcome at the end of the ultimate war is total extinction. But for whom …or what? 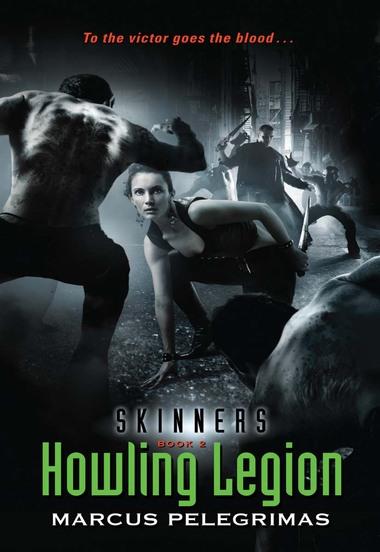 Howling Legion
No one said fighting monsters was going to be easy … You can't see them, but they're here: hiding in the pools of shadow outside a Chicago burger joint …wreaking havoc in Kansas City …feeding in sleazy "blood brothels" that cater to humans who itch to get bitten. Cole was designing video games when he learned the truth - that foul creatures of the night lust for our blood …and our world. Now he's a "Skinner," a member of an ancient secret society of warriors entrusted with keeping the terror at bay. Monsters once chained to the wilderness are suddenly free and descending, razor claws ripping, on the unsuspecting city. No one knows what's coming - but Cole and his seductive partner, Paige, will be the first to dive into the meat grinder. 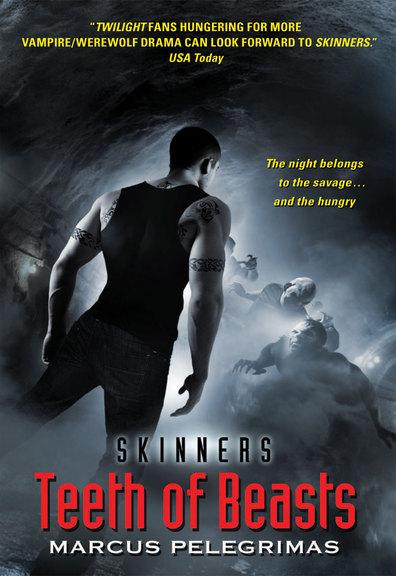 Teeth of Beasts
When a den of werewolves is uncovered underground in the subways, Cole and Paige make an even more frightening discovery - a deadly plague effecting the creatures, which threatens humanity. 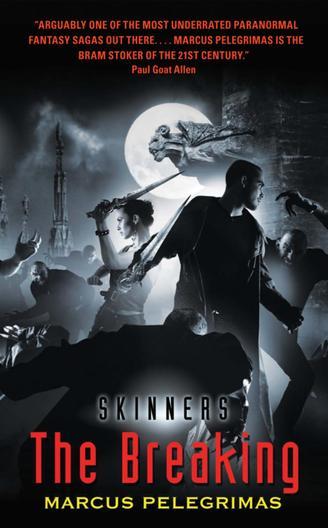 The Breaking
Shapeshifters, vampires, and all manner of monstrosities are raining hell down on a small western town - which is why Skinner Paige Strobel is headed there with a band of Old World Skinners who have been battling monsters for centuries using antiquated, yet oddly effective weaponry. Meanwhile, Paige's sometime-partner/sometime-lover Cole Warnecki is being held prisoner by persons - or things - unknown: framed, tortured, and beaten for the slaughter of cops at a vampire warehouse in Denver. For Paige and Cole, a search for answers has become a battle for survival. The future of unsuspecting humankind is balanced on a knife blade. And the Apocalypse is a certainty unless they can uncover the truth behind a terrible force powering monsters and hunters alike …and find out why - after horrific werewolf attacks in KC and bloody carnage in Philly - Skinners are suddenly, inexplicably, turning against Skinners … 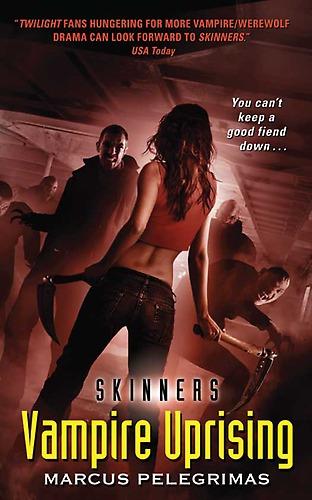 Vampire Uprising
A legendary Skinner has passed. Among the articles he left behind are runes, potions, and powerful weapons to aid in the ongoing war against the unspeakable creatures that prowl the shadows outside normal human consciousness. But there is something else: the remains of a terrifying beast no other Skinner has ever encountered. And it isn't dead. Skinners, partners, lovers, Cole Warnecki and Paige Strobel are well armed with the tools the late Jonah Lancroft provided. But even his best weapons may not be enough to defeat the monstrosity they now face. A new terror has risen up to infect them both with its virulent malevolence, even as Paige confronts the secrets of her astonishing past. The purest evil walks the world again - the First Deceiver, humankind's darkest nightmare, the self-proclaimed King of the Full Bloods.