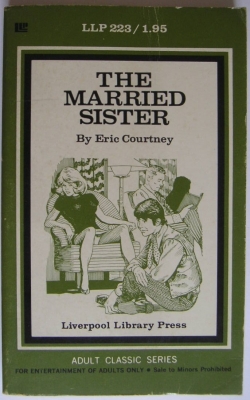 It was a lovely morning. But, then, it was always a lovely morning in San Diego. A Mr. Branson, retired, henpecked, was out tending his garden bright and early. His wife was pleased with his sudden interest in gardening. Actually, old Branson didn't care a hang about flowers or lawns, they were all weeds to him. What he did care about and why he was out in the garden bright and early every morning was for the pleasure and excitement of seeing their neighbor, young Gail Hanover, walk out of her house and down to the mailbox and then back up the path again.

On what Branson called "good days" she would open the mail then walk slowly back up the path to the house. The slower, the better, for Branson's interests. This particular morning, he positioned himself in a corner of the yard, crouching over a bed of marigolds and pretending to dig while his eyes looked through his bushy eyebrows and he waited.

And Gail was well worth the waiting. Yesterday, she had come down to the mailbox dressed in a lounging gown and old Branson had gritted his teeth against his anger at being disappointed then almost fell in a bed of tulips as, while she was opening the mail, her gown fell open and he saw one leg up to the hip bone. It was an indelible image he would savor late at night while lying next to his snoring wife. She was wearing high heels under the gown and her leg showed itself off beautifully with slim tapered ankles curving out into well-rounded calves. Then – and every time Branson thought of it, his mouth went dry – a thigh. Not just any thigh, but full, voluptuous thighs that seemed to swoop out in pure white firmness. And all she was wearing was a rose-red bikini panty!

Branson had to close his eyes when he thought of how the panties stretched tight across her hips, revealing the soft bulge of one pelvic bone and the way the material caught tight and was tense at the V of her crotch.

It was only for a split second, but old Branson had seen it and found himself shaking. "By God, if I were only twenty years younger!" he had muttered.

The postman had delivered the mail, turned the flag up and Branson was in position. His only regret was the fact that he couldn't get closer.

Gail Hanover came out of the house. She had risen early, determined to clean. It was such a bright and sunny day, she saw no reason for wearing a lot of clothes. A pair of shorts and one of Rod's old white shirts pulled and knotted around her slim waist seemed enough. She came from the house barefoot and old Branson crouched like some old satyr and peered through his white picket fence.

Gail came down the path tossing her hair. It was beautiful jet-black hair and contrasted sharply with her pale blue eyes. The tights were old and rose high on her hips, almost revealing her hip bones. A pair of hip huggers she had cut off, they slung low, revealing her navel which Branson saw with rippling flesh. The V of the huggers fit tight over her crotch. Gail enjoyed the slight pressure and excitement they afforded her and walked in a hip undulating fashion to heighten the sensation.

Old Branson fell to one knee as he craned forward, his now sweating face no more than three inches from the fence as he saw her bending to open the mailbox. My God! he thought, that young chippie isn't wearing a bra!

It was true. Her ample breasts seemed to shift under her husband's shirt and the nipples made little reverse indentations on the cotton, sticking out in a provocative way.