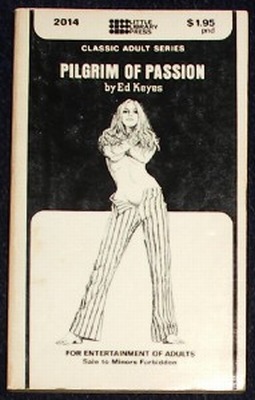 She was in trouble and she knew it. Instead of going directly home, she sat in the park and thought about things. She was expelled from school, and according to the slip of paper they had given her, she was to bring her parents with her when she returned again.

It was a glorious spring morning and she had little real interest in school. She had other things on her mind.

She decided that she would call Raoul and see if he was at home. If he was, she was going to spend the day with him. She liked the things that she could do with Raoul and he was very eager to teach her things.

She was fifteen and her body was developed to the point where every male around looked at her and seemed to enjoy doing it, too. And she liked being looked at. She knew that. She liked Raoul, too.

He was not like the boys that she knew. He was in his early twenties and he had only recently come from Europe. He was very polished about sex and all of its pleasures and he had agreed to teach her all that he knew. She thought that that was very nice of him. And she did want to be a good pupil.

Her parents were dead and she lived in a foster home with a couple who were too old to try and raise a very beautiful blonde foster daughter. She hated her foster home and she was doing a lot of thinking about running away. Perhaps today would be a good day for running away. She would have to talk it all over with Raoul if she went to see him.

She glanced at her watch, then she walked over to an outside phone booth and she dialed Raoul's number. He answered on the very first ring. She said hi and he said hi and then she blurted out the truth.

"I got expelled," she said. "They say I take too much time off. Like that. What are you doing?"

He laughed. "I'm thinking about what a nice day we could have if you decide to come over here."