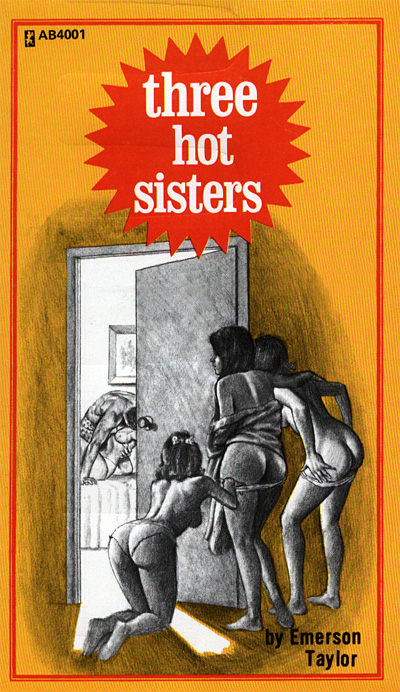 "Unngghhh! Get it in, all the way in! Oooohh, you're so fucking big, so hot and hard! Mmm, you're fucking me to death! Agghhh! Don't stop fucking me now; I'm dying for it; I'll die if you don't fuck me all the way!"

Sue, Ann and Lyn Barden stiffened into board like poses when they heard the throaty, husky cry issuing from their parents bedroom that afternoon. Had some mischief-maker – the school's authorities never discovered the culprit – not thrown a stink bomb into the central air-conditioning unit, thereby making the entire building unfit for human habitation until it could be fumigated. They would never have been released from school at noon of that day and allowed to go home. Thus they would never have decided to creep into their house in an effort at frightening their mother. They supposed that she would be sewing or cleaning house or engaged in dome other domestic duty and the idea of throwing a scare into her had attracted all three of the sisters.

Sue, had suggested the prank and her younger sisters had felt honor bound to carry through with it. Ann and Lyn might have backed out had they been by themselves but with Sue along to inspire them they could hardly do otherwise than to follow her mischievous example. They had, therefore let themselves into the house and moved silently through the lower floor in search of their mother. Not finding her in any of the downstairs rooms, they had pulled off their shoes and silently mounted the stairs leading to the bedrooms. As soon as they reached the landing, they heard the cry of a woman in deep physical distress.

All of them heard the words clearly and knew what they meant; Sue had already seen to that. While her sky blue eyes and cornsilk hair gave her an angelic look, the girl underneath was something quite different. She was already an avid reader of pornographic books and usually saved a quarter out of each week's allowance in order to rent one of the many luridly illustrated volumes which Tommy Harper made available to anyone at the Hammondville Public School who could pay the rental fee. Her reading of those explicit books had given her a fine knowledge of the ways of men and women and she had already attempted to translate some of the theoretical knowledge into practice. She would have succeeded too, except that she miscalculated the extent, to which she had already aroused Doug Matson, the youth whom she had selected to her accomplice in the project, and brought him to a climax as she was attempting to get his prick stuffed into the lightly fuzzed lips of her pussy. The flood of hot, sticky come which had emitted from his cock that afternoon had fired her desires, though, and she had wanted him to fuck her properly at the first opportunity.

Sue exchanged a meaningful look and a lewd grin with her younger sisters, both of whom were almost exact copies of herself, except that neither of them had the same pronounced bustline as she and neither had anything like the growth of downy, blonde fuzz on her pussy that Sue had. She lifted a forefinger to her lips in a gesture for silence and tiptoed toward her parents' bedroom. By maneuvering carefully she managed to peek through the open door. The sight caused her almond-shaped eyes to widen with astonishment. For a moment she imagined that her father had, for some strange reason, put on one of her mother's wigs before he had started fucking her; the male figure she saw atop her mother's heaving body had dark, almost black, hair, a far cry from her father's sandy thatch. She blinked and looked again, uncertain now. At that moment a cry from her mother made it clear.

It was at that precise moment that Sue realized that her mother had herself a lover, a day-time boyfriend. She briefly regretted having been the instigator of an escapade which exposed her mother's infidelity not only to herself but to her sisters as well. Though she was terribly horny she had a sense of responsibility in matters that did not concern her own pussy and she realized that Ann and Lyn might find the scene a terrible one. It was too late for recriminations, through; her sisters were crowding around her. And even as she cursed herself for having been the means of enlightening them all about their mother's behavior, she felt a strange, awful power at work within her loins, a force even more gripping than the one she had felt when she had fist fucked Doug into that premature climax.

For all her regrets, and they were genuine enough, Sue discovered that watching a couple fuck was far more exciting than reading about it or even looking at the exceedingly frank, detailed pictures in the books she borrowed from Tommy.