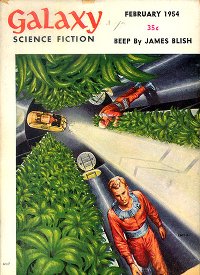 “The first time machine, gentlemen,” Professor Johnson proudly informed his two colleagues. “True, it is a small-scale experimental model. It will operate only on objects weighing less than three pounds, five ounces and for distances into the past and future of twelve minutes or less. But it works.”

The small-scale model looked like a small scale—a postage scale—except for two dials in the part under the platform.

Professor Johnson held up a small metal cube. “Our experimental object,” he said, “is a brass cube weighing one pound, two point, three ounces. First, I shall send it five minutes into the future.”

He leaned forward and set one of the dials on the time machine. “Look at your watches,” he said.

They looked at their watches, Professor Johnson placed the cube gently on the machine’s platform. It vanished.

Five minutes later, to the second, it reappeared.

“How can you place it there, then?” asked one of his colleagues.

“It will, as my hand approaches, vanish from the platform and appear in my hand to be placed there. Three o’clock. No-tice, please.”

The cube vanished from his hand.

It appeared on the platform of the time machine.

“See? Five minutes before I shall place it there, it is there!”

His other colleague frowned at the cube. “But,” he said, “what if, now that it has already appeared five minutes before you place it there, you should change your mind about doing so and not place it there at three o’clock? Wouldn’t there be a paradox of some sort involved?”

“An interesting idea,” Professor Johnson said. “I had not thought of it, and it will be interesting to try. Very well, I shall not…

There was no paradox at all. The cube remained.

But the entire rest of the Universe, professors and all, vanished.