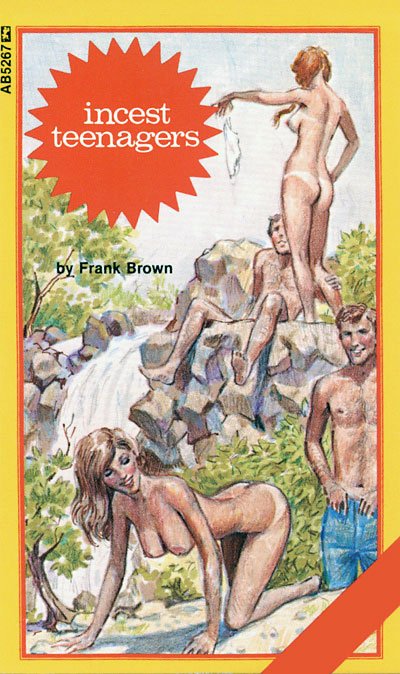 "Brrr!" Janet said. The room was frigid, and she was stark naked.

She half-squatted on the cold wooden floor while she sawed the side of her hand up and down her pussyslit. No good. She needed a hot body to rub against. Maybe one of her brothers was still awake. She opened her door and quietly slipped out of her room.

The upstairs hallway was bathed in the blue-silver moonlight that shone in through the window at the far end. The polished hardwood floor gleamed like ice, and it felt as cold as ice on Janet's tender feet. The nights got cold this late in the year, but not cold enough to warrant building a fire in the furnace. As she crept across the hallway to peer into her parents' bedroom, Janet shivered. Her hot nipples stood out like spikes in the nippy air.

The door of her parents' bedroom was wide open. Janet peeked in. The bed was still made, parents nowhere in sight. Janet sighed, her hot breath steaming in the cold air. At least that obstacle was out of the way. She wouldn't have to worry about her parents now. If one of her brothers did happen to be awake, she could smuggle him into her bedroom without the worry of getting caught. She crossed her fingers and tiptoed down the hall.

The floorboards screeched under her feet. She winced with every step. She had to laugh, causing her creamy tits to quiver under the moonlight. She realized that if Mom and Dad were home, she'd have absolutely no chance of smuggling one of her heavy-footed brothers into her room. This hallway floor was a natural burglar alarm.

The door of the bedroom shared by her three older brothers was half open. She could make out a set of naked legs hanging off one of the beds. She peeked around the door. Goddamn! Every last one of them was snoring! Each was sprawled across his own bed under the bright light of the nearly full moon.

"Goddamn!" she muttered, rolling her hard little clit between her thumb and fingers. She didn't dare wake them. She'd tried that before. They threw fits when anyone tried to disturb their beauty sleep. And right now, from the way their peckers were all twitching, they were undoubtedly dreaming about some wild fucking they were doing. Three sleeping bulls.

For a moment, Janet grinned to herself. Maybe if she watched them long enough she'd be able to see their pricks shoot off spontaneously. She'd read about guys having wet dreams, but she'd never seen a guy shoot off in his sleep. That would be a unique experience, something worth seeing. She stood there a full minute watching and waiting. Nothing happened. The three dicks kept twitching and the three brats kept sleeping like Rip Van Winkles. Fuck! This could take all night.