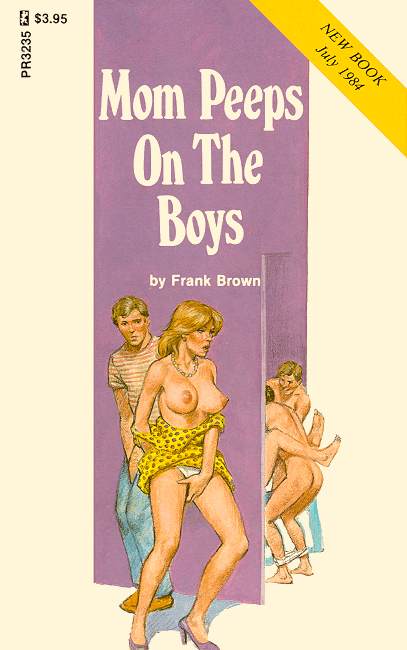 Mom peeps on the boys

Mom peeps on the boys

Alice wondered what it would be like to have a young stud to fuck her regularly. It seemed that every married woman in the world was having an affair these days except her. Even Zenobia Grant – that decrepit old bag on the soap opera Alice sat here watching as the rain poured down outside – was having an affair. The old bag, with her six face lifts and inch-thick makeup, was presently locked in the muscular embrace of the young stableboy who tended her husband's prize horses. The stableboy had to be at least a half century younger than Zenobia. Alice she'd never be able to figure out the stableboy's lust for the old bag. She also knew that if there was any justice in the world, Zenobia would be caught in the act one of these days by her husband and banished forever from his luxurious estate.

Admit it, Alice, you're insanely jealous, she told herself as she switched off the TV with the remote control and turned her attention from the blank screen to the rain sliding down the windowpane. You're jealous because Zenobia has something you don't have – a young lover.

Alice glanced at the pictures of her three sons that were arranged on a walnut table nearby. All the pictures were recent school portrait photos. Her three blond sons stared back at her.

Mark, the oldest, captain of his high school swim team, gave her a cocky grin, almost a smirk. He was broad shouldered, long limbed and exuded self-confidence.

Shawn, two years younger than Mark, gave Alice that blank, serious look. Shawn was the musician of the family. He spent more time at the piano than he did sleeping. Compared to Mark, he was frail and pale.

Ricky, the youngest, gave Alice his usual wicked grin, his nose upturned and freckled, his teeth dazzling white in contrast to his deep tan. The only thing missing from the picture was his little league baseball cap, which he wore backward almost all the time.

What do I have to be jealous of? Alice asked that accusing voice in her head. I have three gorgeous sons and Zenobia doesn't have even one. I have a rich husband, a big beautiful house, all the free time I want, and three of the best sons in the world. If anybody should be jealous, it should be Zenobia.

Alice jumped up off the couch and went to the window.

What a rotten day, she thought, trying to quiet that nagging, taunting little voice. Why does it have to rain and rain and rain?