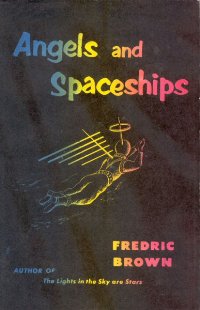 Miss Macy sniffed. “Why is everyone worrying so? They’re not doing anything to us, are they?”

In the cities, elsewhere, there was blind panic. But not in Miss Macy’s garden. She looked up calmly at the monstrous mile-high figures of the invaders.

A week ago, they’d landed, in a spaceship a hundred miles long that had settled down gently in the Arizona desert. Almost a thousand of them had come out of that spaceship and were now walking around.

But, as Miss Macy pointed out, they hadn’t hurt anything or anybody. They weren’t quite substantial enough to affect people. When one stepped on you or stepped on a house you were in, there was sudden darkness and until he moved his foot and walked on you couldn’t see; that was all.

They had paid no attention to human beings and all attempts to communicate with them had failed, as had all attacks on them by the army and the air force. Shells fired at them exploded right inside them and didn’t hurt them. Not even the H-bomb dropped on one of them while he was crossing a desert area had bothered him in the slightest.

They had paid no attention to us at all.

“And that,” said Miss Macy to her sister who was also Miss Macy since neither of them was married, “is proof that they don’t mean us any harm, isn’t it?”

It was a clear day, or it had been one. The sky had been bright blue and the almost humanoid heads and shoulders of the giants, a mile up there, had been quite clearly visible. But now it was getting misty, Miss Macy saw as she followed her sister’s gaze upward. Each of the two big figures in sight had a tanklike object in his hands and from these objects clouds of vaporous matter were emerging, settling slowly toward Earth.

Miss Macy sniffed again. “Making clouds. Maybe that’s how they have fun. Clouds can’t hurt us. Why do people worry so?”

She went back to her work.

“Is that a liquid fertilizer you’re spraying, Amanda?” her sister asked.