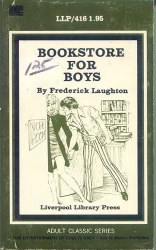 Jennifer Watson drummed her fingers impatiently on the counter and with a sour expression regarded the expensively bound hardback book, featuring on the cover a statue of Aphrodite, that lay out before her. Then she lifted her eyes to the swarthy and somewhat shifty-eyed distributor who stood waiting before her. She was briefly but acutely aware that his attention had been focused not on the book, nor on leer face even. He'd been leering lasciviously at the fully upthrust mounds of her breasts, breasts whose inviting shape could not be concealed even in the most modest of blouses.

The twenty-four-year-old blonde scowled in irritation, and across from her Lou Kelly smiled.

"I've told you, Lou," Jennifer began tiredly. "I don't know how many times I've told you. I'm not turning this bookstore into some kind of Scandinavian sex shop. And that's that."

"Honey," Lou said, slurring the word slightly to reveal not surprisingly that he'd done more drinking than eating during his lunch. "This is different. This is the hottest selling item in town right now."

"I don't care. And don't call me 'honey'. Moby Dick hardly even sold while Melville was alive and it's the American classic. Sales mean nothing. I mean, there's no relation between appeal and quality. I opened this shop because I wanted to offer good literature to this neighborhood, and God must know as well as you that that's something these people have rarely been subjected to. There's a junior high school a block down the street and this store is full of those kids every afternoon. That's not the kind of book I want them to find here."

"It's not that kind of book," Lou said with conviction. Then he grinned, wickedly, lecherously. "And anyway, if you think those little fuckers come in here because they're interested in high class literature…"

"Lou!" Jennifer hissed, again conscious of the man's eyes roving over her voluptuous young body as though to illustrate the meaning of his remark. But the telltale flush that heated her cheeks would have been enough to let him know that she recognized the truth in what he'd said. And it was true. She'd grudgingly admitted that some time ago. Evidence made the fact inescapable. Every afternoon around three, the shop was flooded with thirteen and fourteen-year-olds. Most of them were boys. They rarely bought books, and many of them displayed little interest in even looking at them. But they did look at Jennifer. Sometimes she even overheard their crass remarks. It was at times embarrassing, at times infuriating, and commonly the young owner felt almost like a piece of meat on display in a butcher's showcase.

But ever since she was a young girl, devouring everything of taste and quality she could find to read, Jennifer had regarded good writing almost with a reverence. And she told herself that if, as a result of their prurient interest and curiosity in her, even one of these generally lower-middle class youngsters was able to develop an appreciation for literature, all the discomfort she suffered would be worth it. She carried out this rationalization somewhat as a stern missionary's sexy looking wife might allow herself to be goggle-eyed by a band of heathen savages, rationalizing her becoming the object of their impure thoughts and desires with the trust that their proximity to her scripture-touting husband would lead eventually to the saving of their eternal souls.

Yes, Jennifer realized, it was with a reverence that she regarded great writing. It was indeed partly that reverence that had lead her to marry a young man considered by many critics to be the most promising American fiction writer to appear on the scene since the 1920's. And though this was something she'd tried to avoid admitting to herself, it was to some extent her feeling that by commercializing his last and most successful novel he'd violated the trust of his God-given talent and had precipitated the two of them into a premature divorce.

"Hit a little too close to home with that one, huh?" Lou Kelly asked to interrupt her reverie.