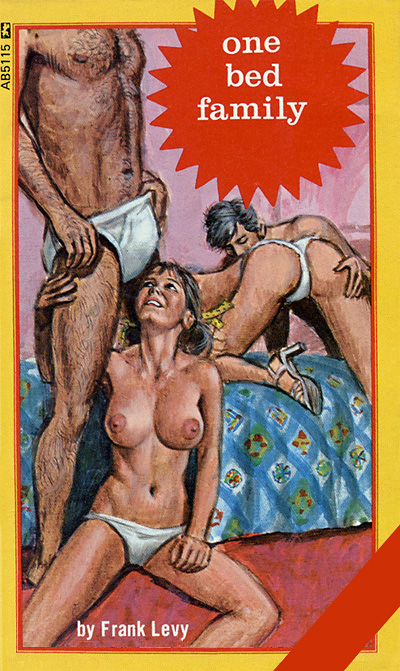 Cindy felt increasingly nervous and unsure of herself the further out into the country the taxi took her. She hoped she would have enough money to pay the man his fare. And if the job interview didn't work out, how was she going to get back to town? Her fingers twisted nervously on the handle of her suitcase. She braced her shoulders back, thrusting her fine tits out against the fabric of her blouse. I'm twenty years old and in fine health, she said to herself. If I have to, I'll walk back!

The ad in the paper had said: "Wanted: Helper for trucker's family. Good pay." She had called the phone number in the ad, and the man had sounded very warm and friendly in an "aw-shucks, ma'am" country way. He had three teen-aged children and no wife. Since he was away much of the time driving his truck, he needed someone to live in and supervise the kids. The pay had been surprisingly good, eighty dollars a week plus room and board. She had few expenses and would be able to save most of it to pay her way back to college in the fall. She didn't want to spend another summer with her aged grandparents and she didn't get much money from the trust fund that her parents had left her when they died, so she had agreed to come out to his house for a job interview.

The taxi pulled into a long, narrow lane among the fields and woods of the beautiful countryside. It looked so lush and green in the early summer. She knew every thing was going to work out just fine. The cab stopped in front of a big, rambling old farm house with a huge trailer truck parked beside it. This was the place all right. She paid off the driver and lugged her suitcase up the steps to the front door. There was no door bell, so she knocked as hard as she could on the door. The paint was peeling off the weather-beaten wood. It looked as if the trucker didn't take much care about his house. The yard was nothing but beaten-down dirt. Cindy felt her heart sink a little as she waited for someone to come answer the door.

Finally, after knocking several times, she heard someone coming, and the door swung open. Oh, my dear Lord! she thought to herself as she took a look at the man standing in the doorway. He was very tall, well over six feet, lean and hard-muscled. His black hair was short and tangled. He had a day's growth of whiskers on his jaws and thick matted black curls of hair on his chest, but what startled her most of all was the fact that he was wearing nothing but a pair of jockey shorts! A very, very full pair of jockey shorts! They bulged out from between his thighs and halfway down to his knees! She felt her knees going soft and wobbly on her. What kind of a mess have I gotten myself into now? she thought.

"Oh, hello," the man said. "Are you the girl that's come lookin' for the housekeeper job?" He wiped his eyes and smiled at her. He was a very handsome-looking man in a rough sort of way. He had big dark eyes and long, black eyelashes, slightly sticky from sleep. His teeth were white, and his lips thin but warm-looking. He scratched the black stubble on his jaw with his fingernail and grinned down at her.

"Come on in. You'll have to excuse the way I look. I forgot you was comin' out, and I fell asleep on the couch watchin' the ball game. Come on in. Let me take your suitcase for you." He didn't seem to be at all embarrassed to be standing in front of a strange woman in his underwear. Well, if he wasn't going to act embarrassed, then I won't either, she thought, and answered his smile with one of her own.

The living room of the house was a perfect mess. Newspapers were strewn all over the floor. Beer cans on the end tables and a bowl with some leftover popcorn showed that the house desperately needed a housekeeper. The man put her suitcase by the door and motioned for her to sit down on the sofa. He turned off the television and sat down beside her. He had his legs spread far apart, and she could easily make out the shape of his very long, thick cock bulging out the crotch of his underpants. His pants weren't too clean, either.

"Your name is Cindy, did you say on the phone?"

"Yes, Mr., uh," she had forgotten his name in her nervousness.

"Just call me George. We're a friendly bunch out here, but I hope you're goin' to like us just fine."