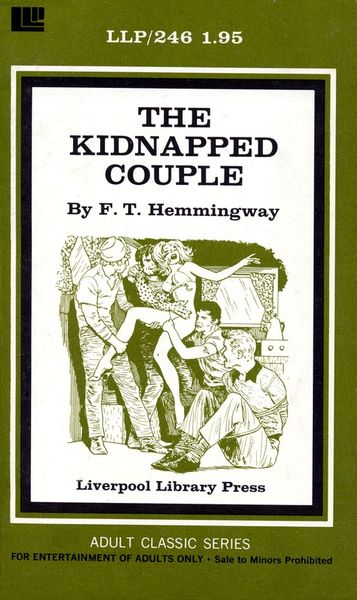 Stan Brewster studied the rear-view mirror of the pickup camper he was driving. There was a cluster of four motorcycles following him up the long grade. A couple of times, the lead motorcyclist had tried to pass him, but the twisting, narrow road, the stream of approaching traffic and Stan's reluctance to pull into one of the turnouts, had prevented them from passing his laboring truck. He listened, critically, to the engine and swore under his breath. There were a couple of fouled spark plugs, which caused the motor to run roughly, reducing its power and his speed. Then, he saw that behind the motorcycles there was a building tail of other vehicles, including another camper and a couple of cars pulling light vacation trailers. He'd have to pull over pretty soon to allow them to pass, but there were no turnouts along this stretch of the road.

This was the third day of his vacation. He'd been looking forward to it for months, but so far there had been nothing but trouble. On their first day away from home a radiator hose had broken, which delayed them for two hours for repairs; as a result they had been forced to stay overnight in a commercial trailer camp. Yesterday, he'd replaced the water pump… and now, today, it was fouled spark plugs.

A frown spread across his handsomely rugged face, and his deep, brown eyes glowered at the images in the rear-view mirror then studied the road ahead for space to pull over. The heavily loaded truck ground slowly up the steep grade in second gear, the punished engine whining its protest.

Angrily, Stan stomped down hard on the already fully opened accelerator and growled, "Come on… let's go… God damn it!"

Sitting beside her husband, Lois Brewster studied his profile through wide, clear blue eyes. She knew he was angry. The first two days of their vacation hadn't been very pleasant. The extra expense and the delays for repairs had made him increasingly exasperated. Her knowledge of machines was limited, but even to her unpracticed ear, the sounds of the laboring engine told her there was something wrong.

"What seems to be wrong with the motor, Stan?" she asked, finally, breaking a long, silence.

"Couple of dirty spark plugs!" He didn't turn his head to answer her question.

She, also, could see the long string of motorcycles, cars and campers behind them. Since their camper was the first in the line, it was their vehicle that was holding back the traffic.

"Shouldn't we pull over… and let those other people pass us…?"