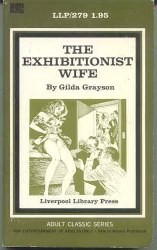 He had thought about it innumerable times in the last several months, trying to figure out what was happening to him when he was in bed with Evelyn, but short of going to a head-shrinker and laying bare his whole life, while lying on a couch answering all kinds of personal, penetrating questions, Fred Holden wasn't able to come up with any substantial answers. Somehow they seemed to evade him, no matter how hard he concentrated on the problem. It just seemed to happen, and he couldn't do anything about it. He had tried a lot of different things, but the one thing he did know for sure was that he wasn't really impotent… And, as far as going to a head doctor, well forget it. He wasn't about to do that, yet.

Seated in the spare bedroom of their apartment, which Fred used as a study, he was trying to run down a column of figures on his adding machine. He was moonlighting, which consisted of running monthly audits for several small, independent businesses, a couple of service stations, a neighborhood grocery store, a dentist and a pet shop. He worked damned hard at his regular job then spent two or three nights every week doing more of the same thing for these small outfits.

He made a stupid mistake, transposing some numbers, and he cleared the machine, corrected the error and leaned back away from his desk in his swivel chair, listening to his portable radio, turned up to drown out the sounds of the television set in the living room. Evelyn was there listening and watching while some insipid singer-comedian went through his studiedly relaxed routines. He couldn't stand to watch that particular program, and he was glad that he could sequester himself in his office on the evenings when that one was aired. What he would like to do was get a little portable set; then he could watch what he liked, such as some of the detective series or a talk show or two. There were some other things he liked to watch, too, but they weren't broadcast on TV.

Looking at his wristwatch, he saw that it was a little after ten-thirty. It was a little early, but maybe – just maybe – he'd be in luck tonight. A little smile of anticipation creased his round face, and he heaved his short, muscular frame out of his soft chair. Going to the south window, he gingerly drew back the drapes, and being careful to stay well back from the sill his eager eyes sought the window of the apartment below and slightly to the left. He was looking down directly on the bed, sheets and covers turned back for occupancy, but he was disappointed. The young couple weren't on the bed, yet. "Damn!" he growled to himself. He'd have to wait. His eyes shifted to the bathroom window. Sometimes they were as careless about keeping that window closed as they were the one in the bedroom. Well… I'm in luck! The light was on in the bathroom, and the window was open… but the only way he could see into his neighbor's bathroom was to be in his. Well, hell… he'd done that before, too.

In his own bathroom, a second or two later, the door securely locked, Fred stepped into the bathtub, opened the window and standing on tiptoe looked down into the similar cubicle of the ground-floor apartment in the next building.

"Christ!" He was disgusted. All he could see was the slimly muscular body of the young husband. The man was facing him and was just entering the shower, his dark chest hairs contrasting with white skin, and below, the extreme hairiness of his loins almost obscured the flaccid tube of his penis hanging down softly against the longer, slightly reddish scrotal sac with its large egg-shaped testicles swinging easily below.

Fred wasn't interested in watching a naked man take a shower; although he had watched that same man make love to his wife, and he knew that the guy was virile, potent and had staying power that wouldn't quit. It was the guy's young wife he wanted to see. Damn! She's a luscious little piece! He wasn't even sure what her name was, but he thought their last name was Pearson. He was just about ready to step back out of the bathtub and go back to work when he saw her.

She drifted into his view shrugging off a light dressing robe. Fred's brown eyes widened, the pupils flaring as he watched her hang the robe on the door, the soft, round orbs of her beautifully sculpted buttocks working as she kicked off her mules. God damn! How he'd love to get his hands on her, his fingers digging into those twin mounds of warm, smooth, alabaster-white flesh. He could almost feel it in the palms of his hands as he watched; then, she turned and was facing him. Her breasts, full and round, were placed high and wide-spaced on her chest, the nipples pouting upward and the pink areolas looked almost like round bullseyes. The rest of her was equally fetching. She had a nice face with regular features, good, even, white teeth, a sensuous mouth, and she was golden blonde all over. Fred's eyes zeroed in on the spun-gold mound of pubic hair framed by slightly wide but curvaceous hips, and he felt his penis, below, inside his pants, come to pulsingly vibrant life. He thrilled as blood pumped into it to be trapped there, the tumescent rod of his cock throbbing with the urgency of his sexual need. His scrotum worked, pulling his balls up tight and achingly toward his crotch.

That's what confused him. He could get a hard erection watching his neighbor's wife undress in the bathroom… but when he got into bed with Evelyn, his own wife… Hell! Half the time I can't even get a hard-on!

… And, it wasn't that Evelyn was an ugly witch, either. She was every bit as desirable as that sweet, young thing next door. There was just something that turned him off when he tried to make it with his wife. It wasn't that she didn't like it. Evelyn was different from a lot of men's wives he knew about: like the ones who always had a headache… or demanded some special favor or gift… or who cynically, even perhaps sadistically, limited their husbands sex demands by making themselves sexually unattractive. He thought about the too-fat wives he knew and the ones with caustic tongues, as well as the constant-complainers… But, hell, that's not Evelyn at all. She likes to fuck… maybe too much! Actually, Fred Holden was closer to an insight into what was happening between him and Evelyn than he'd ever be, but unfortunately he didn't recognize it, didn't pursue the idea far enough. In the apartment's bathroom next door, the lovely, young wife opened the shower door and stepped into it with her husband. "Damn it!" again. There was nothing to be seen for a while. Turning he stepped out of the bathtub and flushed the commode; then, he left the room and went back to his desk. The television set in the living room was still going, and he assumed that Evelyn would be there for another half-hour or more; of course, she knew better than to disturb him while he was working. He had made that damned clear to her, several months ago… right after they were married.