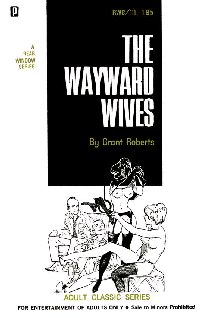 Patty Jennings studied her lush nude body, beaded with droplets of water from her recent shower, in the full-length mirror attached to the back of the bathroom door. She was tall, almost five-ten, perfectly proportioned from the top of her rich, natural reddish-gold hair to the tips of her small, Cinderella-like feet. Her breasts were full and firm and large, but without the perpetual sag of most heavily endowed women; they were beautifully rounded, marbled beneath their almost translucent whiteness with tiny bluish veins, standing out high and proud from her symmetrical chest, and the large pinkish brown nipples, distended from the hot, recent lashing of the shower spray, rose from their darker areola like blossoming buds on some exquisite spring flower. Patty stretched her arms luxuriously high over her head, posing wantonly, sultrily in the bathroom's privacy, the way her young husband Larry had always enjoyed her doing for him.

She held the pose for a moment, letting her eyes move slowly downward over her smooth, pure white stomach, seeing the sculpted navel peeking out from within its circular recess. Her pubic hair, the same reddish-gold color as her tresses, glistening with moisture, formed a perfect triangle which covered her somewhat prominent abdomen and pointed downward, invitingly, to the soft, pink lips of her vaginal furrow, ending just above the shyly nestling bud of her clitoris. She saw and was pleased by the way her slim, alabaster waist swelled into softly rounded, classical hips that curved in turn into lovely tapered, milk-white thighs. Her buttocks, she saw as she pirouetted slightly, were large and just as flawlessly formed as her pliant, peaked tits; she noticed that they hollowed and dimpled provocatively, the muscles rippling beneath the naked skin like the gentle current of a mountain stream.

Patty continued to study herself for a moment longer, critically, deciding that her figure was just a little too lush. If she had had her choice in the matter, she would have preferred her breasts to be just a little smaller, her fanny just a little less rounded, her bushy pubic mound not quite so bushy. But Larry had told her that he preferred full-blown women, that he wouldn't have her any other way, and she reversed her decision, concluding that she was really quite happy with her body as long as Larry was happy with it. After all, a woman was made to please her man, and she had pleased Larry during the two halcyon months they had had together before his Marine unit was shipped to Viet Nam fourteen weeks ago, he had told her that enough times after they had finished making love.

Patty selected one of the fluffy jacquard towels from the chrome rack and began to dry herself, moving the soft shaggy towel briskly over her albescent skin, watching in the mirror as her firm young breasts jiggled and bounced from the quick toweling, the nipples seeming to grow even harder, as if in arousal. She began to dry her pubic area, fluffing the reddish-gold hair, making the triangle look curly-soft, like the hair of a young girl child after a shampooing. She dipped the towel between her legs, spreading her thighs apart slightly to allow it passage, moving the woolly material along her open cuntal slit, along the well-divided, softly seductive edges, bringing it back upward again to pass over her clitoris. Surprisingly, she felt a sudden flash of desire at the electric contact of garment and sensitive passion flesh, and the miniature phallus rose into instant erection. Patty could see it, seeming to quiver in the cradle between her legs, peeping excitedly through the sparse adornment of hair, and she swallowed as another wave of arousal seized hold of her body. She began to tremble slightly, and in her mind she could visualize Larry's large, blood-fired penis, the way it looked as it stood stiffly out from his hirsute belly, the way it felt as it stabbed into her passionate, love-drenched vaginal passage, bringing her to unknown heights of sheer ecstasy, spewing great quantities of her loved one's hot, sticky seed deep into her cavernous pussy as they both climaxed together.

God! Patty thought, taking the towel away from her private parts and putting it back again on the chrome rack. I can't keep thinking about Larry like that, it's not doing me any good for heaven's sake.. but it's been fourteen weeks since I've felt him inside me, since I've been loved, since I've had release fourteen weeks is such a terribly long time to be without a man once you've experienced the joys of sexual lovemaking.

She sighed, a little tremulously, and took her frilly pink nightie from the clothes hamper; it was very short, ending just below her pubic triangle, and the rustling material was not quite transparent, hiding everything and yet hiding nothing. Larry had gone absolutely wild when he'd seen her wearing it for the first time, during their honeymoon in Carmel, and he'd almost torn it from her body in his haste to make her naked and fulfill the desire it had built inside him. She probably shouldn't wear it now, especially here in the home of Larry's father and mother, but she had given all her other nighties and pajamas to the Goodwill when they'd gotten married and had never bothered to buy another one.

She put the nightie on, smoothing it down, and the cool nylon felt pleasing against her briskly rubbed skin. As she opened the bathroom door and started down the short hallway toward her room, she thought of Larry’s parents. His mother, Gladys, had insisted that she stay with them while Larry was overseas; there wasn’t any use, she had said, of Patty trying to fend for herself-buying groceries, paying rent and utilities – - when she could live with them for free; that way, Patty could save almost all of her salary from her stenographic position with one of San Francisco’s larger insurance companies as a nest egg for when Larry returned from his tour of duty. Larry had thought this was a fine idea, and Patty had agreed – - although she had felt it was encroaching on her in-laws, that she was still something of an outsider.

But the fourteen weeks she had been staying with the Jennings bad been pleasant and happy ones. Gladys was like her own mother – - who had died when Patty was twelve – - in that she was kind, genial, easy to talk to. A plump, matronly woman, she had made Patty feel as if she was her own daughter, mothering her, watching out for her.

Larry’s father, Tom, was something of a different story. It wasn’t that Patty disliked him exactly; it was just that be made her feel uneasy at times. A large, bearish sort of man, Tom Jennings was given to moments of surliness, of caustic and not particularly funny humor. And the way he would look at her occasionally, with his hot, intense gray eyes.. well, it was almost as if he were undressing her, as if he was harboring a kind of secret and full-bloated lust for his own son’s young wife…