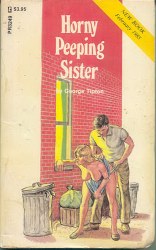 The woman writhed around on the bed and out in the darkness of the alley beyond her lighted window, the boy stood watching. She teased her nipples through the filmy negligee she wore, and the boy saw her lips moving as a man, naked, wandered into the picture of the brightly lit window.

Tom Moon sighed and stood with his legs spread wide apart. He stuffed both his hands down into the front pockets of his jeans and stared, his eyes wide with envy and wonder as the man inside the window slid onto the bed and took the lovely brunette in the black nightie into his arms and kissed her.

The couple rolled together, with the man ending up on top. Tom could see that as they kissed the woman reached between their bodies and took hold of her lover's prick. Tom knew that the man's cock was big and he couldn't wait to see the woman take it. His own cock slithered down one leg of his jeans, and Tom nudged it with his fingertips, moving it to a more comfortable position.

The woman's slender arms jerked on the man's cock, which was still pressed between their undulating bodies. The man's naked ass humped and rolled and Tom imagined the tip of his cock was running up along the woman's hairy cunt. Tom had never felt a pussy around his own prick but he knew, from watching the ecstasy that it brought others, that it was an incredible feeling.

At last the man rolled off the woman and she quickly crawled up on top of him, straddling his waist with her long, white legs. As she moved, Tom got a flash of her naked, brown-haired cunt beneath her thin nightie and his cock lurched, pounding in his jeans.

As she sat down on the man's cock, Tom watched her pretty face contort with happiness. She faced him completely, with the man beneath her partly hidden from view. But Tom didn't care that he couldn't see the man she was fucking. All he cared about was this wonderful, sexy woman and the wonderful way she looked when she had a cock inside of her.

His hands still jammed inside his pockets, Tom tickled the sides of his stiffening prick-shaft. His mouth hung open, dry with excitement. He no longer noticed his surroundings, the dark back alley in which he stood. Now he had been transported and stood in that brightly lit bedroom, watching the fucking taking place there.

As the man tossed the nightie up to get at the woman's tits, Tom was treated to a look at the dark triangle of cunt-hair between her legs. As the man worked her titties, the nightie worked up so that Tom could see the contrast between her white lower belly and the dark hair of her cunt. Her pussy-hair was flush against the lower belly of the man, and Tom knew that she had his cock far up inside of her.

The woman let her head roll back, her long hair falling behind her shoulders as she moved her lower body in slow, sensuous circles. The dark vee of her pussy hair moved slightly and Tom's eyes were riveted to it, imagining what was taking place inside her body right there. It was as if he had x-ray vision and could see the cock that penetrated her, filling her pussy with its girth and power.