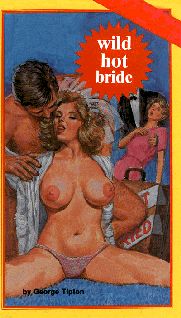 Her wedding dress in a heap beside the motel room bed, the new Mrs. Scott Samuels' sighed as her handsome husband ate her pussy.

Pam's long legs were shaved and not a blemish marred her creamy skin anywhere. Her short, dark, curly hair was sculpted to perfection and she had even trimmed the dark hair between her legs into an elongated triangle.

"God, honey, that's so good," she sighed. Like his bride, Scott was tall and dark. His tongue slid along the crack of Pam's cunt in a motion that was not unfamiliar. He and Pam had been fucking for a couple of years, even if they had only been husband and wife for a couple of hours.

His hands held her thighs open and gave his face lots of room to move between them. His thumbs caressed the insides of those tender legs. Scott had quite a reputation with the ladies and, because Pam had managed to reel him in, Pam had become something of a mystical figure herself. There were many people in town who doubted that their marriage would last – and plenty of young women ready and waiting to comfort Scott if it didn't.

But Pam was determined to make it work. She knew her husband was used to lots of excitement and she was ready to give it to him. She was sure that, if she kept him good and fucked at home, he wouldn't go looking for pussy elsewhere.

Scott's tongue slipped up along the opened crack of her cunt and her juices rolled down his throat. His tongue was long and pointed and he used just the tip of it to keep her cunt-crack open. He sizzled it up and down from her cunt almost to her puckered little asshole.

God, how she had waited and worked to see this night come true. And now that it was really happening, it was even better than she had expected. She couldn't wait to leave for the city tomorrow. She knew that a honeymoon with a man like Scott would be just this side of heaven.

Scott flattened out his tongue and ran it around and around her cuntal area. Every inch of flesh between her legs was aflame with lust. She couldn't keep her hips from jerking up and down and she clenched and reined the cheeks of her ass involuntarily.