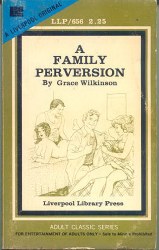 Liz Rouelle would celebrate her forty second birthday in just a couple of months, but right now she felt ageless in a young sort of way. She always felt that way after a good hot driving shower that pinkened her easily pinkened skin and then, lifting her thick auburn hair out of her shower cap, letting it flow over her delicately arching neck, looking at her still youthful-looking reflection in the full length bathroom mirror. She was young. After all, this was the twentieth century when a woman didn't hit old age until… huh… Mae West hadn't hit it yet in her eighties!

Her skin was still taut over her high cheekbones, and she couldn't help but be proud of the dazzling green eyes gazing back at her, slanted slightly, thick lashed, blinking back at her with a growing amusement. It was exhilarating to be beautiful. She shuddered to think that she would ever be not beautiful! After drying her body thoroughly with a plush light blue towel, she examined it carefully. Her fully curving voluptuous body was every bit as firm and taut as a teenager's, she realized. Her tits were high-set and round, and her slender girlish waist expanded enticingly to round luscious hips. She had a flat smooth stomach and full-swelling thighs. Her calves were breathtakingly curved and tapered down to small wellformed ankles. And all over her skin was a slight sprinkling of freckles for a touch of sauciness, which actually embarrassed her. She was a very serious and meticulous woman and did not indulge in games. It was not that she couldn't have a good time or laugh at a joke, but there was a time and place for such things… after the more serious aspects of life were taken care of. She attributed her lasting beauty to a lifetime of moderation…

Yet, contemplating this, a look of pained bewilderment clouded her eyes and she let the long damp towel fall with a sigh of weary discouragement. What was life, after all, when you didn't know what you were being meticulous about or moderate for? She stepped closer to the mirror, gazing searchingly at the picture of perfection, and almost wished she were not so lovely. In that context, she might be able to make more sense of Tom's peculiarly indifferent attitude toward her, especially lately. It had been at least two weeks since they had last made love, which might be natural, and was certainly better than having to fight him off all the time the way she had to years ago. He had eventually learned moderation, but the moderation had dwindled lately into abstinence, and she didn't think she wanted it to go that far!

Suddenly, from the TV room, a high feminine squeal of laughter interrupted this depressing chain of thought. Liz put on her robe and went out into the hallway. Her son and his new bride were back from their honeymoon and visiting while they searched for an apartment. As she started by, Liz peeked into the TV room, and her green eyes narrowed and focused more sharply on the strange picture confronting her. Kevin's lean and muscular body was spread out on the couch in a pair of shorts. Liz's heart pounded unexpectedly. He looked so much like his father at about the same age. He had the same dark handsome looks, the curly dark hair, the deep brown eyes. He also had the same wild energy that she had fought so long to hold under reasonable control. Now this little girl he had married, nothing but a bleach blond, and as wild as Kevin had ever dreamed of being! It was a shame! After all of Liz's hard work and careful training, the new Natalie Rouelle threatened to undo it all!

Right now, the little blond, in a tight jersey and shorts that were at least two sizes too small for her, was trying to sit on Kevin's lap. Her lushly curving ass kept sliding down onto his pelvis, and his arms swooped out to grab her by the elbows and cast her off. But she laughed and bounced right back onto the thickly bulging protuberance now fully apparent straining against his shorts. Liz blushed and stepped away. For a minute she couldn't even catch her breath. It was strange to her to have a son and see him grow into manhood. It had been a challenge when he was younger, a challenge to make him into what she wished Tom had been, more conscientious and subdued. Now it was a heartbreak for her to see all her work being undone! She had done such a fine job. If only she had known he was getting married! If she could have stopped it before it was too late!

Liz went to the kitchen, running her fingers through her auburn hair. It was still a little damp. She ought to dry it. But she needed a cup of coffee at the moment. It was very unsettling, as flamboyant as Tom always had tried to be in the beginning, to have Natalie and Kevin pawing each other right in their own TV room. Liz wondered how long she was going to have to put up with it. She poured herself the largest mug full of coffee she had and started back to her bedroom where she intended to dry her hair. "Come on in, Mom," Kevin called as she started by the TV room door. "We're experimenting with brandy Alexanders today. Man, can I mix a mean one!"

"No thanks. I think I had better wait until before dinner," Liz said.

"Well, come visit a little anyway," Natalie invited, smiling demurely. She was in the process of raising a chocolate looking drink to her full sensuous looks. She poked the drink toward Liz.

"To Mrs. Rouelle… senior!" she smiled.