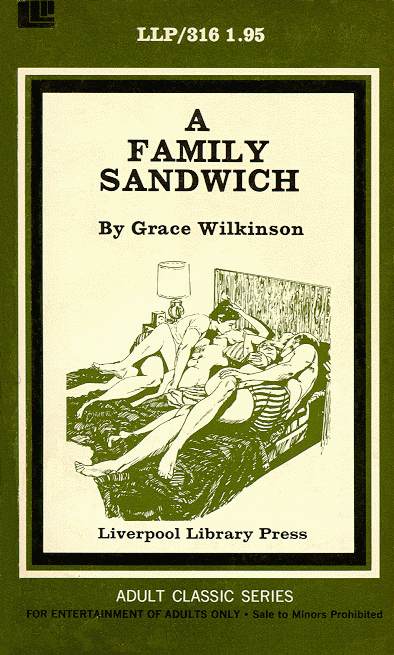 "Well, I hope he's not planning on staying forever!" Fran said, her lips pursing in a half-pout. The attractive 29 year old housewife was looking in her dressing table mirror, brushing her hair before going to bed. Her long blonde curls shone magnificently. Fran was proud that she had kept her looks and her figure so well since her erstwhile career as a model in New York. She hadn't modeled for very long, but she had been popular and all the photographers as well as the agency she'd been with had assured her that she had a splendid future in the business.

Fran had given it all up for Brint Cooper, however, a fact that she was beginning to regret more and more, especially recently. And now that Brint's unemployed brother was coming to live with them – heaven knew for how long – Fran was beginning to feel more trapped than ever.

She brushed furiously, letting the electricity the brush created snap and crackle around her head, her eyes reflecting the frustration and anger she felt at the course her life was taking. It had to happen now, too… just when their daughter Jeanie was getting old enough to require less parental attention from Fran… just when Fran was beginning to feel that she could breathe again. She'd been considering getting a job, something glamorous which would require her to go into New York fairly often, something which would allow her to escape from the dull Queens community of bored housewives and uninteresting husbands.

Now, of course, all her plans were ruined. There'd be another mouth to feed, more meals to cook… and men were helpless in the kitchen, or at least she'd never met one who wasn't. Fran knew for a fact that Brint's younger brother was a spoiled brat, even though he was 20 years old by now, and she knew that he would expect to be waited on hand and foot, just as her husband himself did!

"Damn!" she cursed under her breath, feeling annoyed because she felt that Brint hadn't even heard her. He was in the bathroom running the water, brushing his teeth probably, and what did he care what she thought anyway? She banged the brush down on the table top and brusquely moved her chair back, all noises which she subconsciously hoped would reach her husband's ears.

Standing up, Fran took in the image of herself in the lovely long satin nightgown which she'd bought herself in Bonwit's during a secret shopping trip she'd made into the city. It was creamy beige and showed every single curve she had, including the soft uplift of her well-shaped, rounded breasts with their tiny nipples protruding saucily and, when she turned around, the soft dimpling of her lightly quivering buttocks, smooth yet pleasantly supple.

Yes… it was still a very, very good figure, she reminded herself once more, even if the only person who got to appreciate it these days was her husband Brint! Instinctively, Fran struck a pose for her own benefit, remembering the cooing encouragement of the long-gone photographers. One of them especially would say such wicked things to her, things that made her respond exactly the way he wanted her to, and the pictures had turned out to be the best she'd ever taken. She still had them in her old portfolio and from time to time she took them out and looked at them. Sometimes, too, she would even think about the time that same photographer – Giuliano was his name – had gone farther than usual… much farther… and they had made long and passionate love right there on the floor amidst the tripods and the lights and the photo paper. God, it had been wonderful!

Fran still felt a twinge of guilt about it, even though thinking about it excited and pleased her so much that she could go through a whole day without getting depressed about the present boredom of her life. After all, she told herself, she had no reason to feel guilty. She'd been single at the time, even though she was already going out with Brint… Brint who was hounding her and pestering her to give up modeling!

"What's that for?" Brint said, coming out of the bathroom and into the large, comfortably furnished bedroom. He'd been looking at his wife's outrageous stance for some moments before speaking, and he felt he had to say something that would let her know just how ridiculous he thought she looked.

Fran jumped at the sound of her husband's voice and turned to face him defensively. "Can't you make some noise when you enter the room?" she asked. "I'm entitled to some privacy, you know… I'm a person too." She was going to say more, but thought better of it at the moment. Nevertheless, Brint saw that she was in the mood for a fight, and coincidentally, he felt in the mood for one too. He'd heard her slamming things around in the bedroom, and the telltale signs of her anger had not been lost on him. He hadn't been married to Fran for over eleven years without beginning to understand some things about her anyway, even if many of those things were purely surface manifestations.