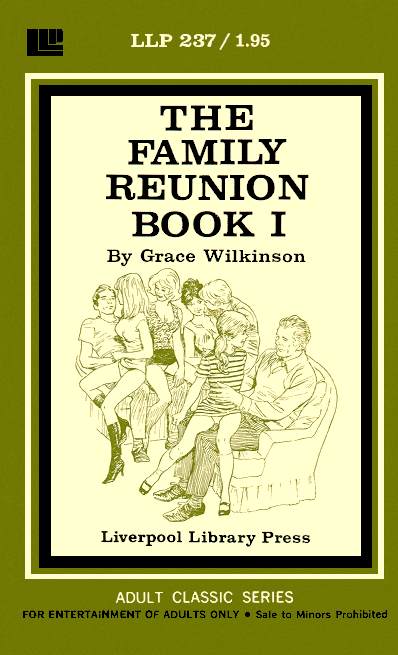 The family reunion book I

The family reunion book I

"There's a lot of curves left in the old girl yet!" Carrie Livingston murmured to herself in her husky voice. She was examining herself in the new smoked mirrors she'd had installed in her bedroom, and she liked what she saw. Even though she was no longer a young woman, her face and figure continued to belie this fact, giving back the image of a voluptuous woman in the prime of life.

Carrie was wearing a long diaphanous dressing gown of a silvery tone that set off her pale ash blonde hair to perfection. It also left little to be guessed at of the curvaceous shapes of her body, exposing the deep cleft of her full, milk-white breasts to view and snugly encompassing the girth of the two firmly raised mounds in shimmering material. As she turned around slowly in front of the floor to ceiling mirror, she noted with some satisfaction that the curves of her buttocks were still just as round and provocative as they had always been.

"I'm tall," she said. "And that always helps!" She knew many women exactly her age who were short heavy-set old ladies by now. Carrie was somewhere in her middle forties… the exact number she kept a well-guarded secret, even from herself. It was easy to forget, she found, the older she got. She stood barefoot in the deep snowy white pile rug that she had just had installed. The sensuous feeling beneath her wriggling toes made her feel good all over. She was very pleased with the complete results of the remodeled room. Even though her husband, John did think it was ridiculous, the 30's style decor gave her enough satisfaction to offset any of John's sarcastic remarks! The gigantic circular bed with its satin sheets and fur coverlet was a source of amusement to John who was far more interested in the running of his successful mountain resort than the foolishness of interior design. He had left the job of decorating the cabins and the guest rooms of the big house up to Carrie, and she had confined herself to furnishing them in a comfortable modern atmosphere. But for herself, she much preferred something more exotic… and after talking about it to John for several years, he finally agreed to let her do anything she wanted to the bedroom. It was to be her domain. After all, he had told her, they were making quite enough money with the resort during the summer months to afford it. "Livingstons" had become a big name in the Catskills after only a few years, and John and Carrie were proud of it. In exchange for letting her re-do the bedroom, as well as supply herself with a complete new wardrobe to her own liking, John had asked Carrie to go along with him on something he had wanted to do for a long while. Have a family reunion!

Carrie coiled herself up on the middle of the big round bed and sighed. She was glad everyone was coming tomorrow. She looked forward to seeing the children again. Stretching out and looking up at the 6 x 6 foot mirror over the bed, she stared at her prone figure in the same smokey glass and thought it would be particularly nice to see her son Jamie. It was hard to believe that he was a grown man now… with a wife and child. Why she could remember when he was just a little boy… the sweet way he used to sponge her back in the tub… just the way that old lover of hers used to do. Giuliano… she wondered what had become of him! It had been a long time since she'd had a lover, she realized… over 10 years… Her husband, John was hardly the romantic type, even if she did love him… a woman had to have some romance in her life!

She had thought that redecorating the bedroom would help her recent depression, but it had only seemed to augment her problem. Now she really missed the excitement of her youth… especially of those days before she had met and married John… but also, she had had some good times since, unbeknown to him! There was none now, though, and with a panicky feeling in her stomach, Carrie wondered if there ever would be anyone else now! Letting her hands run softly over the upstanding points of her thick nippled breasts and down along her waist and hips, she thought what a shame it would be if no other man would ever admire the perfection of her figure, or tell her she had the smoothest skin in the world!

She lifted the skirt of her long dress up and traced a line along the length of her nicely rounded thigh. In her mind an imaginary lover approached the sacrosanct area of her waiting pussy, moistened slightly by the thoughts of other men touching her there. Her own fingers touched the thin elastic leg-band of her panties and slipped secretly inside… just as Giuliano had done, time and time again.

"Oh, God!" she thought. "What on earth am I doing?" But already the well cared for hand with the carefully buffed fingernails painted a pearly soft white, approached the silken-haired triangle that nested Venus-like down between her slightly spread thighs. One finger flicked out further still and teased at the thin, curl-lined lips that guarded the smooth wet mouth of Carrie's cunt.

"Am I interrupting something?"

Carrie jumped up to a sitting position on the bed, rapidly removing her fingers from beneath her robe.

"John!" she cried momentarily angry and blushing, "Don't you ever knock?"