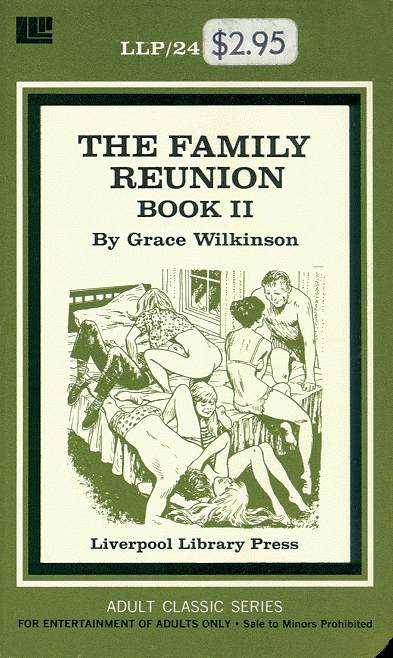 "How could I have done it?" Carrie Livingston awoke with a delicious sensation in her loins… that feeling that she had felt often before when as a young woman she had indulged herself with indefatigable lovers. This time however, she knew that it was not a question of some young man she had spent a pleasant afternoon with, but rather something much more serious… something she could hardly even admit to herself this morning. It had been with her own son-in-law!

Beside her, her husband John lay, snoring deeply in sleep. Carrie shifted her voluptuously formed body beneath the silk sheets. She looked over at her husband's craggy, handsome features. A terrible feeling of guilt swept over her as she realized that John hadn't an inkling of an idea just how far she had gone in her search for reassurance that she was still attractive to younger men.

"It's only because I was feeling so blue…" she thought, staring up at the mirrored ceiling she'd recently had installed. "That's why it all started… once I let Ike do that to me on the porch… it was only a question of time before I did something even more perverted!"

The smoky mirror on the ceiling reflected the image of a glamourous woman of uncertain years. Carrie's beautiful features and shining pale blonde hair had withstood the years with considerable grace, and even though she was a grandmother, many would never have guessed it. But she had been feeling more and more upset recently about growing older, that was one of the reasons she had persuaded John to let her redecorate their bedroom in the big house of their popular mountain resort. She had chosen a theme dear to her heart, and by the time she was finished the large bedroom with its two bathrooms would have done credit to the most finicky of Hollywood movie stars. It was "30's" posh, complete with circular bed, shaggy white rugs, smoked glass mirrors of a hazy blue tint on both the walls and the ceilings. There were several chaises with low accompanying cocktail tables, and a well-stocked bar. As for the bathroom that Carrie called her own, she had installed a large sunken tub of an octagonal shape choosing ornate lions heads for the spouting faucets.

Carrie had hoped that this, in addition to the new wardrobe she had purchased, would make her happy. But she found that it only accentuated the feeling of loneliness she had. In spite of her love for John, she still felt a need for something more exciting in her life. She knew that John thought her ideas were ridiculous, but he nevertheless went along with her… even when she had shown up at the first family dinner in that Marlene Dietrich see-through gown! She'd spent a lot of money having a dressmaker copy it for her… and the festive dinner had seemed to her just the occasion to wear it, even if it was a little daring!

Carrie turned over on her side, burying her head a little deeper in her pillow as she recalled her son Jamie's reaction to the dress, and how their bitter argument over it had led her to drink all that champagne, which had in turn made her respond to Ike's advances… her own son-in-law! She remembered his strong young fingers… and how they had insinuated themselves beneath her panties, moving upward, high into the already moist area of her golden haired pussy… slipping in and out, in and out, making her cry out against him. What a wonderful feeling of excitement and mounting desire she had felt. She could still feel excited just by the thought of her daughter Tricia's husband… and the very idea chilled her. But she knew, that there was worse than that to consider. With a groan, she tried to block it all out, but she only succeeded in thinking about it all the more.

Even though the fall morning was cool… the first cool day of a streak of searing Indian Summer days… Carrie felt unduly warm beneath the covers. Perspiration formed on the portions of her body that were covered by her beige satin nightgown. Between the luscious thighs that had been so often admired by her first boyfriends, and then her adoring husband, and still later, intermittent lovers, there appeared a dewy moisture that curled the silk threads of Carrie's secret triangle of sex still further. She felt a tingling down there that was tantalizingly reminiscent of the powerful love-making she had enjoyed so thoroughly only the day before. Her breasts seemed to long to be touched again… and high inside in the tight darkness of her vaginal canal, she felt an emptiness, a longing that grew with each passing second. Her hand slipped down to the hem of her nightgown, and slowly, she raised it, breathing softly so as not to awaken her sleeping husband. It seemed odd to her that he was sleeping so late that morning. Usually he was up at the first crack of dawn, and she was usually not long in following him. But she was grateful that he was sleeping like this… she needed all the time she could get to gather her nerves together, after her harrowing experience of the day before.

While Carrie's mind wandered, her fingers travelled the length of her long slender thigh. They moved slowly but surely toward the palpitating center of her being. The golden triangle of sex seemed to tense with the approach of her own hand, and she knew that she had to assuage this new onslaught of desire. The entire lower half of her body felt unduly agitated as her fingers fumbled toward the hair-lined slit that enclosed the moist jewels of her cunt. The wet slit opened at the soft touch of her fingers and she let them dip into the soft fleshiness of the fuzz-lined lips.

She parted her thighs ever so slightly and began to move her pearly painted fingernails from side to side and up and down, from the top of the tiny tip of her clitoris… already swollen and red, to the small gullies of flesh and the protruding inner lips… then down below to the hungry throbbing well of softly pulsating pussy.