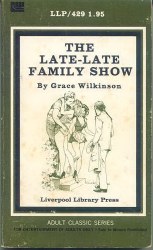 "And that's the news for tonight. This is Andy Taberon wishing you a very pleasant evening!"

Andy kept the very studied but seemingly relaxed and casual smile until the red light above camera three's lens went off and he was free to turn to the monitor to watch the credits rolling over the screen. The glimpse that he caught of his wife's name made him once again begin wondering why the hell she had been so aloof for the past week or so. The popular upstate newscaster felt a brief flash of familiar anger and his face reddened as he realized that he was just about always wondering why Lola was so cold to him these days. It was getting so that they hardly spoke to one another, and they had only been married one year!

The camera men were busy shutting down the studio, and Andy made a display of straightening the papers on his desk. He was thinking of just what he was going to say to Lola when one of the station technicians came up to him.

"Good show, Andy," he said. "How are you feeling?" It was obvious to everyone that the newscaster hadn't been up to par for the past few nights, and the technician was curious to know if the reasons were personal – that is, he wondered if Andy and Lola were fighting.

Andy merely shrugged, ignoring the question, knowing that his questioner was digging for information. Who couldn't help noticing that he and Lola were scarcely speaking to each other, even though they worked on the same show night after night… and were married!

Lola was the weather girl, full of cleanliness, charm and suppressed sex, and she had as much of her own following as Andy did. The amount of complimentary mail that the two of them received from the viewers was staggering. Together, they were very popular personalities, primarily with the people from the small broadcasting area that they serviced. Andy and Lola had been written up in the Albany papers when they got married, and it was assumed that whenever they wanted to they could go on to bigger things – like a network show. It had happened more than once before.

But Andy wasn't worrying about advancing. He made a good deal of money as it was, and his fan mail and the distinction of his calling made him a happy and peaceful man who approached the age of forty-four with a sense of accomplishment and satisfaction. That's the way it was… before he fell in love with the pretty blonde weather girl!

Now Andy certainly couldn't consider himself happy, no matter how he looked at it. Miserable was more like it.

Glancing at his watch, the newscaster made his way to a small room which served as an office and a dressing room. With a concerned look on his face, he removed his glasses and began to take off the make-up which he had to use for the cameras.

Where in the hell was Lola anyway? he pondered. He'd passed her dressing room and knocked, but there'd been no answer.