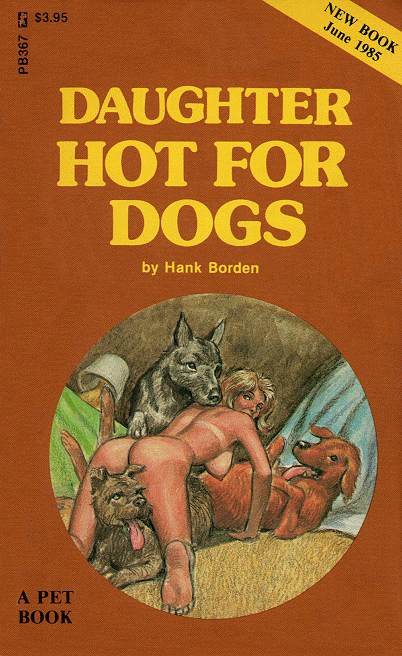 "Come to me, doggie. My name is Ann and I want you to fuck the shit out of me."

The tall shapely redhead was stark naked. She was sitting on her living room floor, her round ass resting on the soft carpet. She had an audience of one, a big-titted blonde teenager who was sitting on the edge of the couch, watching with interest. But the woman with the long red hair was not concerned with the young girl at the moment; she was more concerned with the big black-and-brown German Shepherd that the young girl had just brought into her house. She meant to fuck the animal.

The German Shepherd, with the smell of pussy strong in his nostrils, forgot that the woman was a stranger. He stepped up close and allowed her to stroke his thick fur. Then, while she was stroking him, he stretched out his head and started licking her big round tits.

Ann shivered at his touch, but kept stroking his sides and belly. Loving her gentle hands, the dog continued to lick her sweet-tasting tits. He snaked his long red tongue up and down her left tit, knocking the juicy mound of tit flesh this way and that.

"Mmmmm! Oh, yeeeessss!" Ann threw back her head and closed her eyes dreamily as the dog's rough tongue jolted her senses.

The dog slithered his tongue round and round the big tit, tasting every inch of the woman's tit meat. His hard licking put new life into her tit. He made her cry out and tremble as he nearly scraped her nipple raw.

The dog moved his head to and fro as he slobbered over her entire tit. Soon doggie spit was dripping down to her belly. Ann moaned and whimpered, and began tossing her head dreamily from side to side as blissful heat waves coursed through her body.

Suddenly the beast took her nipple between his hairy lips and started sucking on it, as though he were nursing. She squealed loudly, then cradled the back of the animal's head and encouraged him to continue.

Loud sucking noises filled the air. More spit dripped down to form a puddle on her belly button. She shivered from head to toe, her mind racked with unbelievable sensations.