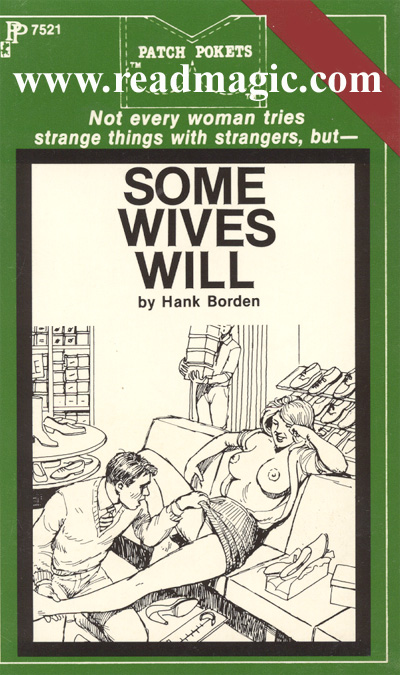 "Eeece!" the big-titted redhead squealed. "Oh, no fair. You bit my nipple, you naughty boy." But the tall dark handsome man paid her no mind. He sank his teeth into her red nipple once more and made her squeal again. Then she laughed aloud and wrapped her arms around his neck, pulling his naked body closer to hers. "Wow! Your hard-on is driving me wild. I can't wait to fuck you."

Mia watched the two on the sofa from the hallway, where she couldn't be seen. She had entered the house through the back door to pay Sally, her next-door neighbor, a social visit. She hadn't reckoned on finding the shapely divorcee in the arms of a lover in the middle of the afternoon. She wished now she had knocked first, to save everyone a lot of embarrassment.

"Oh, lover," Sally moaned, writhing like a bitch in heat on her living room sofa, "suck my tits hard! Make 'em burn!" She cupped both tits in her palms and lifted them towards the man.

Though the crimson drapes were shut tight, enough daylight entered the living room so that Mia could see all. A slim, long-legged blonde, Mia watched with fascination from her vantage point in the hallway, her large blue eyes fixed on the two naked bodies on the sofa.

The man tasted Sally's tit hungrily, snaking his tongue in all directions. He moved her big tit up and down, until it bounced heavily, wildly, again and again. He made her red nipple throb from the friction of his lapping tongue. It wasn't long before her whole tit was glowing hotly and throbbing unbearably.

The shapely redhead shook her head deliriously, as though loving the blissful heat that filled her tits. She was quickly turning on to the man's hot licking, becoming more and more aroused. With a desperate look, she offered her other tit to him.

He covered it with his mouth at once and began slobbering on it. Lewd sucking noises filled the room, mingling with soft gasps and gentle sighs, as he explored her tit with his lips and tongue. He moved his tongue all about her tit, knocking it around and around and up and down, while she moaned beneath him.

Her tit quivered with each suck. It rolled with each lick. In no time this tit too swelled up and began throbbing.