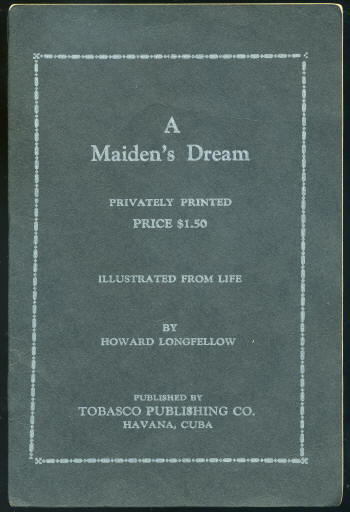 It was in the month of November when the wintry winds start blowing that the hand of fate hrew me into one of those little adventures that come into a man's life.

I woke up that morning with an aching sensation in my back which I could not shake off I remembered a friend who not long ago was afflicted the same way and recommended going to a masseur for treatment. With this in mind, I strolled down old Broadway, when I noticed a neat little sign which read:

Duval, masseur. After pondering a moment, I made up my mind to consult this massage artist and see what could be done for my aching mack. Going up stairs, to the second floor, I entered the neat little waiting room and was approached by a very light and beautiful girl, who by her broken english, seemed to be French. To her I stated my reason and in answer she asked me to be seated and wait my turn, which, would be in a few minutes. After a short time, I was roused from my thoughts by the nifty maid who asked me to step into madam's office. I nearly collapsed when she said madam, as I had always thought that all masseurs were men.

I did not know whether to go in or turn around and run, but quickly made up my mind to stay. Stepping shyly into the next room I got the surprise of my life.

Standing beside a white little table was madam.

Well, talk about Queens, she was that and more.

Tall and well built, with a face that some only see in pictures, she greeted me with a smile that made me feel quiet at home an daskd me what my ailmnts were. After giving her a description of the pains I had (but forgot after seeing her) to my surprise she asked me to get undressed.

Hesitating, I slowly took off mn clothes until only my underwear remained. I asked what was next, but she insisted on my stripping naked. Noticing my shyness she assured me she was quiet used to male patients, which relieved me of my embarrassment. Arranging a long white table with pillows she asked me to lay on this, which I did, wondering what was next. I did not have to wait long when she started to knead my arms and chest with her beauiful arms. I lay there with a pleasant feeling as she skillfully ran over my body and at each movement I became sensuously infatuated with this beauty who was so close and yet so far. As she rubbed over my body, the blood started to tingle with the spirit of youth. And there I lay in a state of blissful excitement, as she gently rubbed; and the longer she rubbed the more my nature started to assert itself. Tenderly she went over my body and worked around my thighs when suddenly my penis started to erect until finally it stood there under the electric dome as Washington monument in the moonlight. Gosh! I was in my 7th heaven when she rubbed between my legs, and every time she touched my balls, they seemed to grow larger and larger.

The perfume she used was delightful and it went to my head. Then she asked me to lay on my stomach which I did and she started rubbing my back and loins. Working down again slowly, she came to my sensitives organs. As those hands rubbed between my legs the thrill simply made my hair stand up.

The beast in me started to get the best of me. The minutes seemed like seconds to me. I wished I could lay there forever. After she had finished she covered my body with a sheet and smilingly asked me if I feel better. There was a merry twinkle in her eyes as she spoke which made me like her all the more. Pulling over an electric vibrator she removed the sheet and started to run this machine over my body. Again I felt a thrill ever more than before. Suddenly with a tantalizing smile she stuck it between my balls and worked it up and down my penis which was hard and erect. This got the best of me. Grabbing her around that beautiful waistline I drew her to me and started to kiss her red lips. I begged and entreated he offering her money o ranything she desired if she would only give herself to me for a few minutes. This she refused, but gently pushing me back, promised to relieve my feelings if I would behave.

Laying a towel over my huge penis she gently grasped it in her hands and started working it up and down. This was a relief and there I lay wishing I could eat this angel who was giving me so much pleasure. The longer she worked the more I became worked up. I could not withhold any longer. It seemed as though my head was whirling as my penis ejected streams of creamy liquid into her little hands, but soon it was over and I relaxed with a sigh of relief; getting up I started to dress and asked for my bill, but to my surprise, she winked her eye and said that I could pay when the treatments were finished.

I made an appointment for the following afternoon and saying goodbye to her I left and wended my way home.

That evening seemed the longest of my life. At last the time eame when I would feel the hands of this doll again. At the appointed time I again found myself in her office. She looked radiant and beautiful as she greeted me with a smile and told me to undrss.