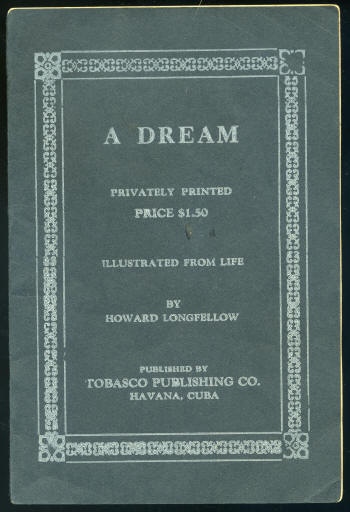 At the time of my twentieth birthday a very sad thing happened, my father died. His will read and executed made me comfortably fixed for the rest of my life.

I decided to go east and look that part of the country over, and summarily took up my abode at an apartment hotel in Baltimore. I did not expect to stay there long, but an adventure plus international complications changed my plans. I was there only about four days when wishing to make some purchases, I went to one of the department st‹ res and was attended there by a beautiful girl, whjse acquaintance I at once endeavored to gain.

She seemed agreeable to these plans and after seeing her every day for the next week, she invited me to her home to meet her mother.

A description of this beautiful girl would here be in order; she was above average height and of slender build. Her skin of very smooth, clear texture and dark with that beauty which comes with the natives and descendants of Southern Europe.

Her eyes large and sparkling, and so dark brown that at times they appeared black; her lips were full and red, not needing any artificial coloring; teeth white and even and glistening like an ad1 vertisement for any dentifrice.

Through her clothes her outline struck one, as with all of her lithe build her bodily contours were perfect, small, well moulded breasts, hips not too large but still very noticeable, hands and feet were so small and well shaped they looked as though they belonged to a child.

The mots wonderful feature of this wonderful girl was her hair; blue black masses of thick coils piled on her a crown that I know any woman would envy, and with an odor that was enchanting. I was overcome by these luxuriant masses of hair from my first sight of them.

Her invitation was readily accepted and arriving at a modest dwelling in a good neighborhood, was welcomed by her mother; as the evening progressed I learned that these two ladies were the last of a proud Spanish family, whose ancestors were among America's earliest settlers.

I failed to give you th ename of my new heroine, it was Isabella Gomez.

After a very enjoyable evening, as I was about to leave, Isabella asked me in the presence of her mother if I would like to spend the night in her bed with her.

I was taken aback, and thought surely she was jesting, making such a proposition within earshot of her mother. Her mother however turned to me and told me it was criminally cruel and unjust to keep a girl from a young man if she loves him, and that if she did not sanction it Isabella might just pick up with anyone and no telling what might happen to her.

I was surprised at this, but readily agreed to share the couch of so luscious a beauty.

We retired to the bed chamber and it was not long before we were both undressed and I was fondling the charms of this vivacious beauty. I was more entranced by her bared loveliness, her breasts stood out like twin mountains, tipped by voluptiously cherry red nippels, her motte was of the blackest I have ever seen and as she moved or walked the red lining of the lips hidden by her hair would peer through.