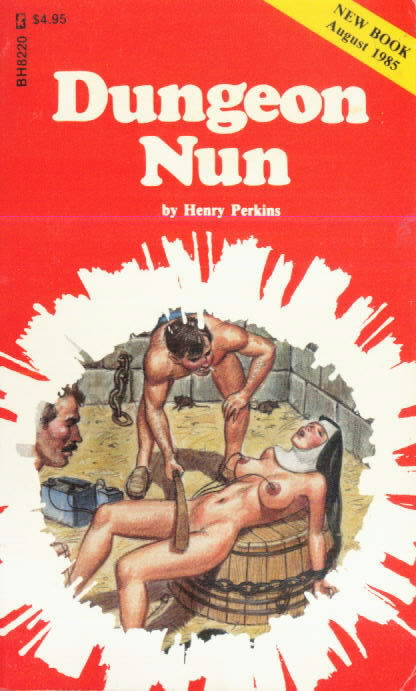 "What the holy fuck are you doing here?"

The gruff voice rose unexpectedly behind the nun from the shadows of the candle-lit room, and Sister Mary Celeste stiffened at the sound. No one else was supposed to be at the old Marsten Mansion, Father Flannigan had assured her of that, so the demanding voice caught her completely by surprise. Slowly, she turned, her head pivoting in fear as the stiff cloth of her long traditional black habit rustled in the silent clinging air.

"It's a Goddamn nun!" the rasping male voice exclaimed. "What's a fucking nun doing in a place like this?"

At the moment, Sister Mary Celeste was wondering the same thing. Evil seemed to hang over the entire place like a dark shroud, and she would have never set foot inside the dank stone walls if her duty to her faith hadn't led her there at the instructions of the monsignor. Just the feel of the air where so much depraved sex and violence occurred in the past was enough to chill her beneath her habit and robe, and almost frighten droplets of piss into the coarse black cotton panties that she wore.

A sinewy man stepped out of the shadows of the doorway into the dusty library where she stood, and Sister Mary Celeste had to keep herself from gasping aloud. He wore no shirt and muscles rippled across his hairy chest and along his thick arms, but the bulging that she noticed most was the one in the front of the tight jeans that he wore. The entire crotch of the denim was pushed out of shape as if the garment had been stuffed with several pounds of heady meat.

Visions of hairy heavy balls and a thick cock weaseled into Mary Celeste's mind as memories from her youth flooded into her and greased her cunt with pussy juice. She could almost smell the muskiness of her father's crotch as she had only a few short years ago when he had set his naked ass on her budding tits and shoved his brutal, hard prick into her face. Saliva slickened her mouth now at the memory of how he had shoved the cockhead between her unwilling lips and fucked her face until his cum had shot down her inexperienced throat. It had happened only once, but the emotions and desires that had been ignited in the teenaged girl had been enough to chase her into the convent and the sisterhood, where faith and religion could keep her mind from rutting sex.

But now, only a year after the end of her novitiate, the sight of the jeans grasping and outlining the man's fuckmeat was threatening to make those emotions arise again.

"You see something you want, Sister?" The man laughed crudely as he noticed her staring at the bulge of his confined cock. "Maybe you bitches in black got more on your mind than saying your daily prayers."

Sister Mary Celeste backed away from him until her ass cheeks bumped against the edge of the long table in the library. She ripped her eyes away from his crotch and up to his evil grin, fmding little solace in his expression. The fingers of her right hand sought out the simple gold band that she wore on the other hand to symbolize her commitment to Jesus. It gave her the strength to finally speak.

"What are you doing here?" she asked in a voice that had little breath.