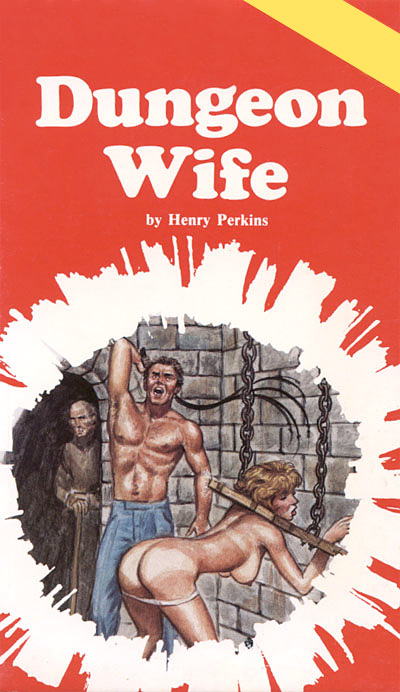 "I want a picture," Tony Rollins said, as his hand left the light switch and he walked over to the old wooden stocks.

"Then take it!" his wife, Debby, urged, her voice little more than a whisper.

Her arms were wrapped tightly around her tits to try to hold out the chill her wispy halter top couldn't prevent. Even her ass was cold. The tight little short-shorts, as yellow as her hair, didn't help much. They were so snug that they showed the crack of her ass, and the crease of her cunt. Even though it was a summer evening, the dank old dungeon in northern New England felt like winter was coming on.

"That's not what I mean," Tony said stubbornly, turning back to stare at Debby.

God, he looks like a nerd, Debby thought. Standing there with a camera dangling from his neck down to his chest. His dark, brown hair looked washed-out in the yellowed light the old bulbs along the wall gave out, and the rough features of his face were shadowed.

"You really don't mean for me to get into that thing, do you?" Debby asked incredulously. "I wouldn't do that in a million years!"

"Don't be such a bore," he chided her. "This is the most exciting thing that's happened in five years of marriage."

"Well, it's not all my fault!" Debby spat, a tinge of anger suddenly coloring her fear. "I can't help it if I don't like all those lewd things you want to do."

"Just think what your friends on the beach would say about the picture," he urged her. "Everyone would get so excited that they would listen to you for days. You could tell them all about this spooky old mansion in Maine with a torture chamber, and have the pictures to back up what you say."

Debby pouted, but thought about what Tony had said. This whole trip, returning to Tony's old hometown now that his parents were dead, had been a real bummer from the start. Rain, rain and more rain, and even the few friends of Tony's that were still around had treated her like a foreigner. How she had ever thought Tony's New England accent and mannerisms had been cute five years ago when she had married him, she couldn't understand now. Just give her sunny Southern California and about three weeks on the beach.