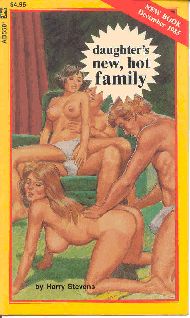 "I'm over eighteen, Papa, old enough now to know what I want!" Kitty Harmon insisted. "Old enough for you to treat me like a woman instead of just a little girl!"

"Papa, you know you want to as much as I do!" Kitty purred, sexily playing with the buttons on her father's shirt. "You're just afraid that Mama will find out about us, that's all. But she doesn't have to if we're careful. And what she doesn't know can't hurt her."

"Don't start dragging your mother into this," Luke replied. "Even if I'd brought you up just by myself and it was just us two on the farm, I couldn't do this. What's wrong is wrong, no ifs, ands or buts about it! I'm a decent man, and I'm going to do my best to make sure you stay a decent girl!"

"Tell you what, Papa," Kitty said. "If I don't turn you on, I'll drop the whole thing. Never bring it up again. We'll both forget it ever happened. Is it a deal, Papa?"

Luke remained silent. And Kitty knew why, which was the reason she'd made the offer to supposedly let him off the hook. The telltale mound at the crotch of her father's pants told her that he couldn't win.