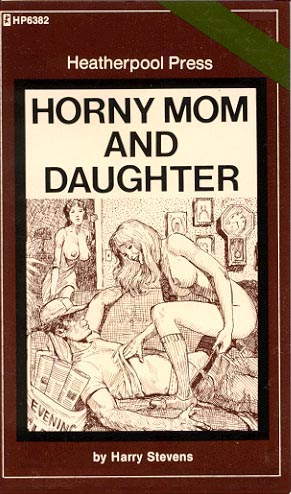 Diane Devlin couldn't believe her eyes. In fact, she pinched herself on the chance she was having a nightmare.

But the image that had her gasping would not go away. It was real, all right.

Diane tried to turn away, but she could not move. Along with her shock, a strange sort of fascination had her in its grip. Although the sight before her made her sick, she couldn't stop watching.

"Beth," Diane whispered her daughter's name under her breath. "I don't believe it's you."

Diane still thought of her daughter as a little girl, even though Beth was now a young woman. To see her "little girl" behaving like a hot-blooded woman blew Diane's mind.

Beth was naked and spread-eagled on the living room sofa. Someone was eating her cunt.

Diane tried to place the boy who was sucking on her daughter's cunt, but it was impossible. His face was hidden, buried in the dark curls of Beth's hairy crotch.

"Tongue me," Beth moaned, scorching her mother's eavesdropping ears. "Wiggle your tongue around in my pussy and make me come."

The boy started to slurp. When his tongue stabbed to the heart of her cunt, Beth squirmed on the sofa.

"It's happening!" she groaned in ecstasy. "I'm coming! Can you taste my juice in your mouth?"