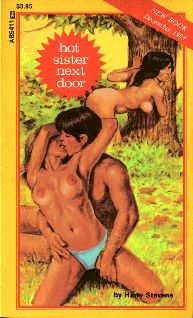 Cindy Ryan had been struggling with her willpower all day. Once again she stared at the phone. Her right hand started to reach for it, but then her left hand grabbed her wrist and pulled her arm back to stop her from making the call.

Then another voice, this one in her head, reminded Cindy that regardless of whether she called him, sooner or later there would have to be a confrontation with Brad. After all, he was living right next door now. She couldn't avoid him forever.

The anniversary of their parting was this August seventeenth. Kennedy had still been the president then. But it seemed like yesterday, as Cindy involuntarily recalled every detail of that fateful day when she and Brad were both still teenagers.

They had been naked, in bed together, the same as so many times before. Indeed, they had become so used to the situation that they had all but forgotten the risk they were taking by being lovers. It was a mistake which would change both of their lives forever.

However, in their casual recklessness they'd had no way of knowing this on that August seventeenth. The only thing which mattered to them at the time was being alone to do whatever they pleased to one another.

"Got it hard for me yet?" Cindy had giggled to Brad as they lay side by side under the cool sheets.

And Brad had laughed, "Maybe this time I'm not gonna make it so easy for you. You want me hard, then you'll have to work for it. Otherwise, ain't nothin' happening."

"You bastard," she said, not anything like angry, yet too surprised by Brad's uncharacteristic resistance to be as playful as she ordinarily was when they were in bed.