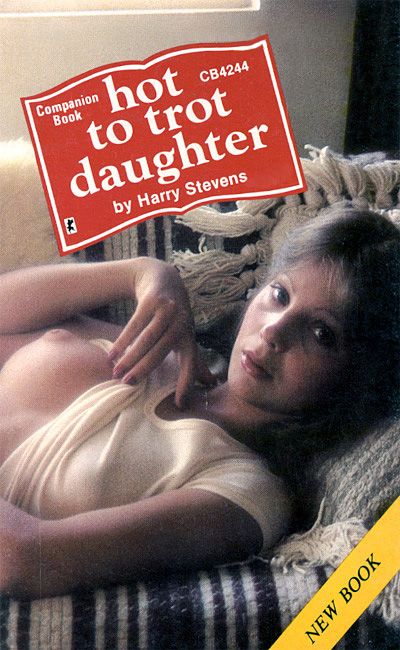 Sally Powell arched back, expecting something to happen from the rigid tongue in her cunt. She was sitting on Gordy's face, letting him eat her out to the ultimate. But nothing very much was happening for her. It had been a dry run so far.

"I think you'd better fuck me," Sally called down to the slurping Gordy.

Gordy had trouble hearing her. Sally's thighs were pressed against his ears. Besides, his mouth was too full of pussy for him to reply.

Sally became impatient. "Damn you, Gordy," she snapped, "this is no free lunch. You give it to me the way I want it, or I'll find somebody who can. There are plenty of other guys around who'd give anything to make it with me."

On the verge of striking out with the only chick he knew who would put out for him, Gordy finally listened. Reluctantly, his pussy-juice-smeared face emerged from the well of Sally's tawny thighs.

"Aw, shit, Sis," he sighed, "I thought we could do the whole trip before I got around to slipping my dick into you. We ought to save the best for last. We've got all day. Mom and Dad won't be home until late tonight."

Suddenly nervous, Sally glanced at the clock. Although there was plenty of time before their mother and father returned, she didn't like to be reminded of them. Not that they were bad parents. It was just the feelings Gordy's mention of them aroused in her. It was all so complicated.

What would Mom and Dad do if they discovered that Sally regularly got it on with her brother? Raise the roof, undoubtedly. And yet, there was more to it than that. Subtract Mom from the situation and Sally was even more emotionally at sea. If it was just Dad who found out, Sally knew that she would wind up blurting out her true feelings. For it was really not her brother she was hot for. At some time during the confrontation she realized that she would not be able to restrain herself from telling her father that it was actually he that she yearned to fuck.

Nobody knew Sally's secret but herself. Who could she tell?

Occasionally she considered sending a letter to Dear Abby or Ann Landers asking for advice. But, when she imagined the probable answer, she quickly dropped the idea. "Dear Daddy's Girl," it would say. "You must seek help at once. Your clergyman, a social worker, a trusted school teacher…" Blah-blah-blah. The typical adult crap. No thanks, Sally always concluded.