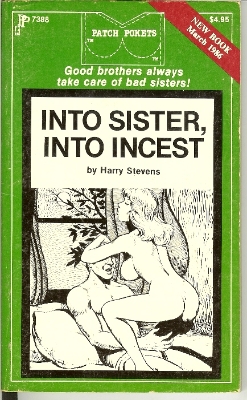 Into sister, into incest

Into sister, into incest

"Ahhh, Linda, I'll never forget that day," Ben replied, recalling when he had taken her virginity. "You were pretty as a picture. Prettiest girl I'd ever seen. Nobody I dated could hold a candle to you."

"I felt the same way about you," Linda murmured, touching her tits with her sticky fingers as she thought back to her youth. "You were just the handsomest boy. For the life of me, I just couldn't make myself get interested in anybody else."

"Well," Ben noted, "there's been a lot of water under the bridge since then, but you still turn me on as much as you ever did. I wouldn't trade fucking you for anything."

"You know I wouldn't either, of course," Linda wistfully answered. "But you and I know, too, that we've both made a lot of trade-offs to get where we are now. If only we could've been two different people it would've been a lot easier."

"That's for sure. For damned sure," Ben had to agree. "But what else could we have done? We both knew when we started that this would always have to stay a secret between us. Just made sense for you to marry Hal and for me to marry Patty."

"I've never come right out and asked you this before," Linda said, bringing a sudden tension into the air. "But do you love her, Ben? Patty? Do you love your wife?"

Ben defensively replied, "That's easy for you to ask now, Linda. Now that you're divorcing Hal."