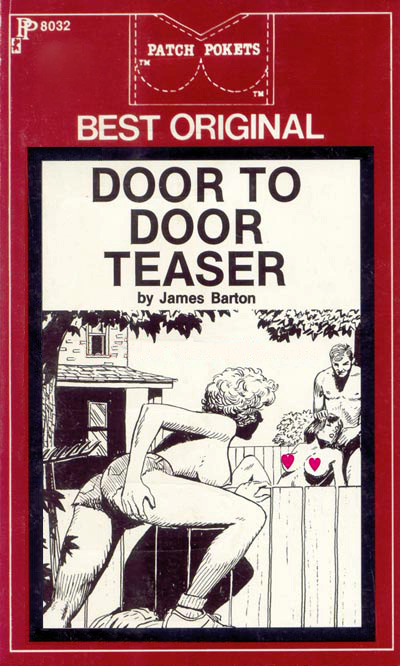 Pam stood trembling with anticipation as the man lifted her skirt gently and drew down her panties. As they moved slowly past her knees, the woman kneeling in front of her removed them by lifting one foot and then the other. She shivered then as the woman lifted the panties to her face and inhaled deeply while the man behind her caressed her full, smooth buttocks and bunched her skirt about her slender waist.

She felt the warm knob of his prick then as he moved his body close to hers and insinuated it between the cheeks of her ass; she spread her legs slightly and as she did, the woman looked up at her, licked her full sensuous lips and smiled. Pam felt a thrill go through her body as the woman moved her hands over her lush thighs, moved them upward and gently spread the lips of her pussy. She watched in fascination as the woman's tongue came out of her mouth like a tiny pink snake and brushed the silken thatch of blonde pubic hair, then licked the widespread surface of her pussy lips.

"Ohhhh… God… yes!" Pam moaned as she felt the man ease his prick between her legs to rest it against the bottom of her cunt. She watched as the woman took a long lick and barely touched the glistening head of the man's throbbing shaft as he began a slow movement with his hips. Then, she felt the waist of her blouse pulled free from her skirt and his warm hands were on her sides moving up to cup her full, ripe breasts. Her nipples stiffened immediately and she thrust her hips forward as the woman closed her mouth over her pussy and found the erect nub of flesh that sent thrill after electric thrill through her trembling young body.

Pam felt the head of the man's prick enter her cunt and she bent forward slightly and took hold of the woman's head as she sucked her pussy in slow, fluid motions and licked the entire length of her lewdly spread cunt lips.

"Fuck me and suck me!" Pam cried loudly as the woman's hands encircled her shaking body to hold tightly to the man's ass as he shoved more and more of his bending prick into her cunt.

Wave after wave of pleasure washed over her body as the man fucked her obscenely from behind and the kneeling woman laved her cunt with her wet, sucking mouth. Oh, God, she thought, how on earth had she ever existed without this – how had she managed to exist before she had become a "Lotus Lady"? She shuddered as the first small orgasm took her and she breathed deeply, knowing that it would herald a rush that would soon leave her breathless but crying – begging for more.

And as she gripped the woman's head and forced her cunt into her face, she felt a warmth spread through her body for the two beautiful people loving her so – they were two of her best customers. It had been such a short time, she recalled, since she had taken that first ride with Marge as she was introduced to the best customers on earth and had become A Lady of the Lotus!