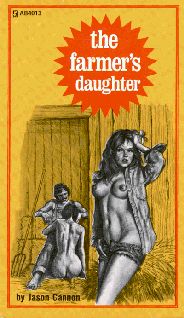 For the third time in as many minutes she cursed her father for neither fixing the hot water heater nor the wheel on the small wagon. If she had to haul firewood up to the wash house, so the water could be heated for the chores, then the least her father could do was fix the wagon so she could haul it.

Perspiration ran in rivulets off her face, across her neck, and disappeared into the deep cleft between her tits. The tits themselves were barely contained by last summer's halter. Pa had told her that things had changed this year. There just wouldn't be enough money for new clothes. Consequently the silver-dollar-sized areolas around her nipples peeked out above the material if she moved to any position other than standing exactly straight up.

Kneeling beside the wagon, pushing with all her might to get the pesky wheel back on the flimsy axle, one side of the garment gave up and her right tit leapt free. Rather than lose the advantage she had gained on the wheel, she paid no attention to it.

"You need some help there, Alma Mae?"

She looked up. The blond-haired, handsome face stared directly down at her, the pixie grin belying the well over six-foot-two frame it topped. "What are you smilin' at, Rafer Clooney?"

"Oh, nothin'. It's just that I ain't seen you much since last summer, what with you in school an' me workin' an' all. I was just noticin' how much you growed up."

She followed his stare down to her naked, swaying tit. Her face turned crimson as she let the wagon fall and stood. She tugged at the halter and pushed at her tit until most of the fleshy globe was again secure inside the material.

She should have been wearing a bra, she thought, but they too had gotten too small for her and they hurt.

He stood, smiling like an idiot as he let his eyes take in what he saw as the suddenly matured perfection of her young body. Long brown legs seemed to go up forever until they met her tight, cut-off jeans. There they molded into wide, flaring hips and firm asscheeks. Her waist was so thin he could have gotten his huge hands all the way around it. The tits were a different story. One of his hands could never encompass the round fullness of just one of them.