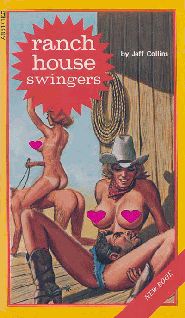 David Reston groaned in delight, his eyes wide, hips working. The object of his joy was Addie Collins' mouth and throat wrapped around his hard dick.

"Better," David said, pushing the throbbing stalk of his huge cock back into her face. "A hell of a lot better!"

Not entirely true, David thought. Addie had always been a super cocksucker, even when they were in high school together.

A low moan of ecstasy escaped from his lips as he watched his prick slip into the beautiful girl's mouth. This is the kind of gin every man should have and even many, he thought to himself. A girl who enjoys sucking a prick. A girl who doesn't pull her head away from your dick when you begin to shoot your load into her head.

He should have married Addie Collins, instead of Fay. Hell, maybe he'd still marry her, after his divorce from Fay was final.

David relaxed into the blow job as he leaned back and watched the blonde head bob up and down on his meat.