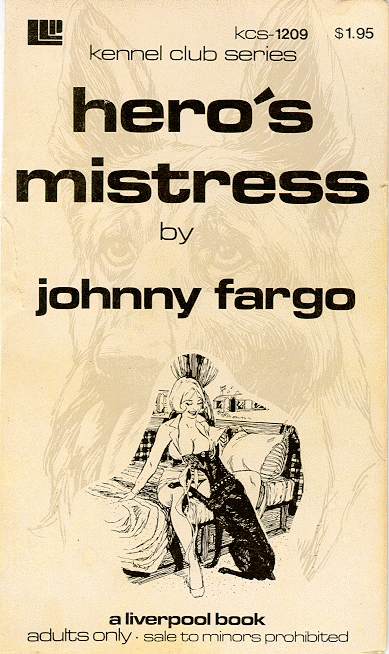 Young blonde Peggy Davis worried all the way into town on Saturday morning that this was a mistake. She knew it was Bob's idea and she always went along with whatever her husband told her, as he was the man of the house even when he was away on a cruise. She was not like some of those Navy wives she could mention who couldn't wait until their husbands were away at sea so that they could run things their own way again. Why, she knew women who had whole wardrobes, even wigs, that they never wore when their husbands were in port, only when they were away! She could never do something like that, not in a million years! She certainly could never look Bob in the eye again if she ever once did something that sneaky and conniving. But all the same, this seemed like sort of a mistake. Of course, if she had been like those other women, she could have just ignored her husband's letter and gone on about her business. Some of those girls could just stand there and lie with a straight face when the ships came in at the base in Norfolk, but not Peggy Davis! Bob said to get a watchdog for their house trailer and she was going to do it.

She supposed it was really her fault, telling him about that break-in over at Mildred Dupree's place. And that poor cocktail waitress that was attacked and raped going home from work early in the morning hours. Maybe if she hadn't been hard up for news to write him about she never would have mentioned those awful things, but she had, and now he was worried and wanted her to have a dog to protect her. Sure, she knew it was silly, but Bob said to look around for one and that was what she did.

For a while it looked like nothing was going to turn up and she had almost decided to give it up as a lost cause. Just one dog had been offered, a German shepherd. That was one of the kinds Bob suggested, but they wanted a hundred and fifty dollars for him. A hundred and fifty dollars for a dog! Why that was more than the monthly payment on their trailer! But then, she'd heard about this one this morning and the price was certainly right… it was free if she wanted it!

Annie Dalton was an old friend of her mother's who worked as a volunteer at the Animal Home Shelter in town and Annie had been one of the first people Peggy went to see when she got Bob's letter but there wasn't a single dog in the shelter that came close to being the watchdog type and Peggy had given up on finding one that way when the postcard came from Annie. There was a beautiful male Doberman pinscher, she had said, whose owners had unfortunately been killed in an automobile accident on the interstate. One of the male volunteers had brought him in and initial reports were that he was extremely vicious so she had not thought of suggesting this one. But Annie herself had seen the dog, even took him out for a walk, and she reported that it must have been the shock of the accident that upset him for he had the temperament of a lamb – with her anyway – though he still did not seem to get along with any of the men who worked there. Apparently no one in the family up north wanted him so he was theirs to dispose of and it was this or… well, Peggy didn't even want to think about that because she had always loved animals, any kind, big or small, since she was a tiny little girl on the farm. Oh, she hoped he would be friendly and like her! If she had to get a dog now even though their budget could scarcely afford another mouth to feed, she hoped it would be a nice animal. A nice happy companion to keep her company until Bob got home, that was all she asked!

Hero was indeed a high-strung devil, just as the shelter had warned her, and, for a few minutes Peggy was sure in the back of her mind that she couldn't take him. Lordy, he was just too jumpy and nervous! She couldn't have a dog around like that! But it was the eyes that clinched the deal… he had the most beautiful, soul-stirring black eyes she had ever seen! They were so… well, so human! He didn't really look like a dog at all when she looked at him head-on, right into those beautiful peepers! Well, one look and she was sold. And Hero had another home.

His name was about all they knew about him, and only because it was engraved into his studded leather and metal collar on a small plate. Just Hero, nothing more. Those poor people who died must have been a strange family, Peggy found herself thinking as she drove back to Paradise Grove Trailer Estates. Why, such a nice car and all, and apparently lots of money, too, but Annie had told her – in strictest confidence, of course, as it was really official shelter business – that none of the relatives from up north even came for the funeral. They just sent some money down through a lawyer and had it all arranged here and not one of them would take the poor dog! Like it was his fault somehow that they got killed. Peggy looked back in the back seat where the big handsome Doberman pinscher sat quietly and she could see his eyes – those gorgeous eyes! – staring at her in the rear-view mirror… Don't you worry, fella' – you've got a home now and I'll try to make you forget all the pain you've been through!

And it was true that they seemed to get along beautifully right from the very start. Annie had suggested it might be because Peggy looked like the dog's deceased mistress, but the young Navy wife put that notion aside. "Ugh, Annie, that's the most morbid thing I've ever heard! He's just like all dogs… he can tell when someone likes him. And I think he's just adorable! Hero and I are going to be the best of friends, aren't we, big boy?" she said, and just like he understood every word, the big muscular animal sat up and barked. But it was a friendly sort of "show-off" bark and Peggy could see he liked her as much as she liked him.