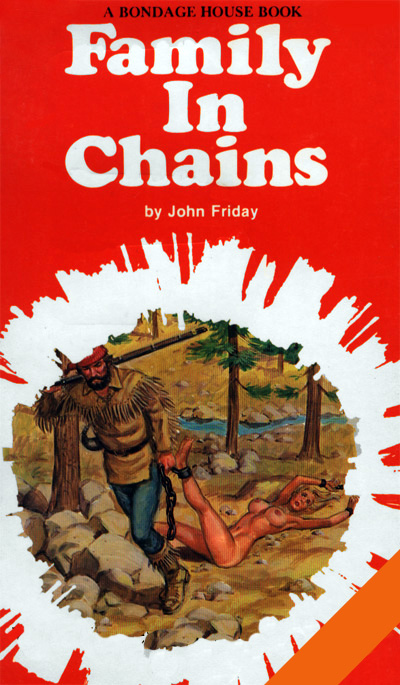 "Nungh!" The sound came from the grassy mound across the meadow. "No! Damn it, no! Not again. Not so soon!"

"Don't tell me no, you stupid little cunt! Fucking is all you're good for. If you don't fuck, you don't eat. I might even fix it so you can't open your Goddamned mouth!"

A loud, ringing slap echoed across the valley. The noise came from a thin slit in the side of a large mound, a dark, narrow opening half hidden behind a clump of brush. The mound was the roof of a sod house, a dome of timbers and planks built over a huge pit hollowed out of the ground. The planks had been covered with earth and a layer of sod, disguising it almost perfectly. It seemed to be a natural feature.

In the hollow of the grass-domed house, Melissa sobbed and shielded her face with her hands. A stinging red welt notched one side of her face, and Wes Sharp stood poised to deliver another vicious slap.

He was a huge man, well over six feet, so tall that he could only stand straight in the middle of the room, where the ceiling was highest. Melissa shrank back toward the wall, dragging a heavy chain. It was attached to her left ankle with a hand wrought metal band.

Wes stomped a giant booted foot on the chain, ending her terrified retreat so abruptly that Melissa almost fell. She stood cringing as he approached.

"Don't back away from me either, you bitch. When I say fuck, you get your pretty little ass up on the bed and spread your legs! Understand?"

"Yes," she moaned, but she was too stricken with fear and disgust to make any move toward the bed.

Wes Sharp had a full beard and a bushy mustache of reddish-brown hair. Except when he spoke, his mouth remained hidden. He was smiling now, but Melissa would not have known that even if she'd opened her tear-streaked eyes.

He grabbed the middle of her long chain in his right hand. His hand made a fist the hardness of a granite rock. The chain clanked as he lifted it up.