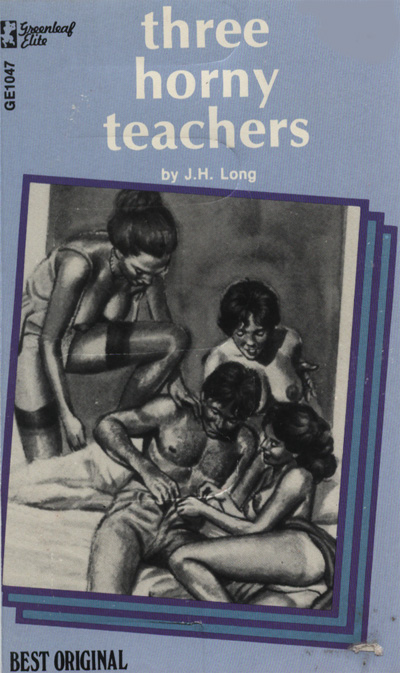 Frieda Higgins was dismayed at what she found in her husband's drawers. No, it wasn't his cock, because she wasn't looking in those drawers. She was looking in the drawer of his bureau, the one that had white athletic socks to the right and neatly pressed T-shirts in the middle and forty pairs of starchy Fruit of the Looms to the left.

Frieda wanted to see what could have caused him to act so… so perverted. Arnold had never acted so… so strangely in their five years of marriage.

Which usually made her feel like not fucking him because he never nuzzled noses with her, or whispered sweet nothings, or creepy-crawled his hand surreptitiously up her thighs.

Shit, the last time Arnold Higgins had acted truly romantic toward his wife was when she had put too much starch in his Fruit of the Looms and it made him feel like he was wearing a plastic girdle. And Frieda had started to cry in order, to make Arnold feel sorry for her.

Arnold felt more than sorry for his wife. He kissed her… on the lips. Which was very rare for Arnold because it meant a show of affection, a little weakening of the old macho heart. Then he did another sweet thing. He touched her right tit… with his mouth, instead of gripping her tit like a football which he usually did when he wanted to fuck Frieda.

But that sweet, romantic moment had happened almost four years ago. And, since that time; now that Arnold had come to the realization that marriage meant that he could fuck his wife anytime that his cock got hard, he had forgotten about things like kissing and caressing and foreplay.

He was, in essence, no different in his lovemaking than in what he did for a living. Arnold was a coach. A very good coach.

Coach Arnold Higgins was the kind of coach that even coaches want to be.