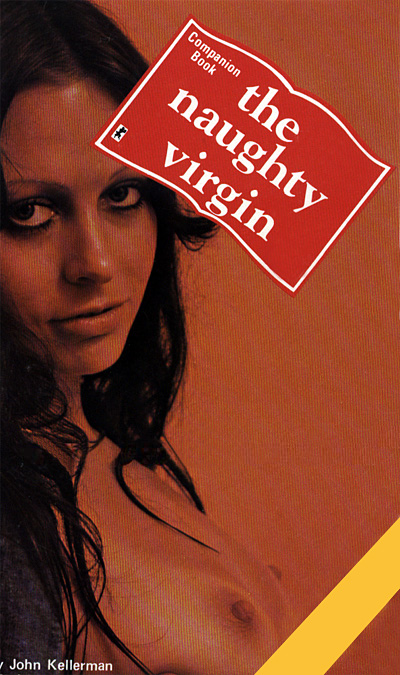 Rebecca had been trying not to think about sex. God knows she'd tried. But every time she closed her eyes, there was that new boarder filling her mind. She could almost imagine exactly how it would be to kiss somebody so good-looking. Not that she'd ever have the nerve. Her aunt had told her that kissing was a good way to get in trouble and Rebecca didn't doubt it. Just thinking about it made her feel all tingly and weak inside. It wasn't a bad feeling, but it was the kind of sensation Aunt Lana warned against.

Since it was Saturday she knew she wouldn't have to get up for another half-hour at least. She tossed under the sheet, stretching and enjoying the lazy time of awakening. Because when she got up there'd be no time for much laziness. Aunt Lana kept her busy with housework and whatnot. At least she'd have the afternoon. Rebecca tossed again, feeling her flannel pajamas tangling between her thighs. The pressure against her young cunt made her tremble. Her nostrils flared as she opened her legs slowly and rolled onto her back. Now the flannel was pulling up between the plump lips of her cunt and the friction mad Rebecca moan.

"I'd better not think about this kind of stuff," she mumbled, throwing the covers back and sitting up. Lana had warned her about self-enjoyment. Not in so many words. But the hints had been plain enough. A young girl had to be especially careful in the bathtub or in bed. Her aunt preferred that she took showers, when it came right down to it. Rebecca sneaked in a bath every so often though. And Aunt Lana thought that a proper young woman should always wear pants-style flannel pajamas with the top buttoned up to the neck.

Her aunt's concern about temptation even extended to what Rebecca was allowed to wear during the day. Not so much what people could see, but what they couldn't see. Like underwear.

Rebecca went to her dresser and pulled out a clean pair of cotton panties. It was hard to really think of them as panties. They were made of thick, white cotton with an especially thick panel in the crotch. They even had very short legs, something like a panty girdle and they completely covered Rebecca from well above her navel to the upper part of her thighs. When she had them on. And she always had to have them on except when sleeping or bathing. Rebecca had the distinct feeling that Lana would've preferred her wearing the damned things to bed too.

This morning Rebecca skinned down the flannel nightwear as usual but something made her stop. She'd caught a glimpse of herself in the mirror. This was a definite no-no too, but there was something about the fresh smell of the air blowing though her window and the cry of birds outside that made her feel a little disobedient. The sparse fluff of red hair that didn't come close to hiding her cunt glistened in a narrow band of sunlight from the open window. It shocked her to see that something glistened down there where her outer lips came together. She was damp, slippery. With the flannel top still on, she stood facing her reflection and opened her legs some. Then, as sexily as she could, she rocked her hips and tried to look seductive. The familiar tinge of excitement went through her but it was immediately followed by one of guilt. Still, the temptation to admire herself was very strong. She was growing so fast.

"God, my legs sure are getting long," she whispered, sliding a heel up her shin to her knee and then extending the leg slowly. This time her cuntlips parted with a wet sound and she could see the glistening slickness, the dainty pink surfaces. Rebecca fluffed her thick, red hair and pouted. She knew she couldn't do this any longer. Lana would know somehow. But she'd never felt quite so wired as she was now. Her fingers trembled as she touched the first button of her flannel top. But she undid it anyhow.

"Forgive me, Aunt Lana," she whispered as she shucked the pajama top off the back of her shoulders. She let it slide down her back and then dropped it to puddle at her feet. Rebecca put her shoulders back and turned so that her tits showed in profile. She sighed to see the curved deepening over her body. She'd been just a straight-hipped, flat-chested little tomboy but now she was getting curvy and rounded. Her tits were the size of tangerines. Large tangerines at that. Her nipples were dimpled little nubs of pink the size of the tips of her little fingers. Her tits ached too. Almost all the time. And though she'd never let on to her aunt, it felt better to rub them. Rebecca rubbed them now.

"Mmmmm," she sighed, closing her eyes for a moment. As her palm accidentally brushed one nipple, a shudder of pleasure went through her. This time she could feel her cunt changing, growing plumper. This had happened a few times in her life and it always disturbed her. She'd thought she was sick the first time her cunt got puffy and hot. Now she knew it was just the sort of thing that Aunt Lana had warned her against. But what could she do? She wasn't trying to make it feel like that.