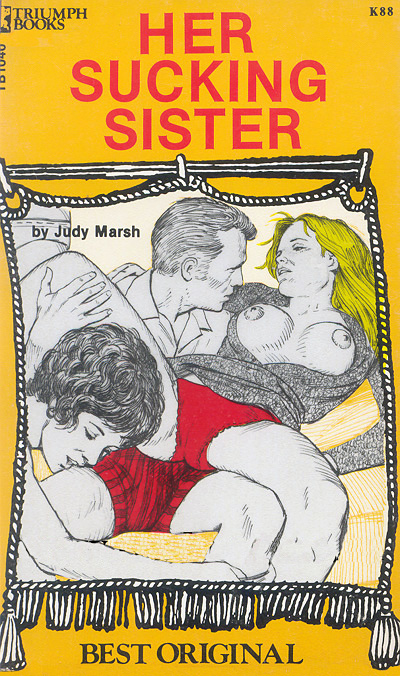 Slowly and quietly Cari opened two louvers in the door of her sister's closet. She gasped. Hiding in her sister's closet, she could see everything that was going on in her sister's room. And it was far more than she had hoped for. Joani, her older sister, and her boyfriend Todd were seated on Joani's bed. Cari could tell that he had his tongue in her mouth. But better than that, Todd had his hand inside of Joani's blouse. Joani was moaning with pleasure as Todd kissed her.

Cari almost giggled but stopped herself just in time. She didn't want to be discovered. This scene was better than the books she had found in her father's desk.

Todd began to unbutton Joani's blouse. Cari could see that Joani was wearing a push-up bra so that her tits appeared to be fuller than they were. Todd pushed the blouse aside and leaned down to kiss her tits softly. Joani closed her eyes and continued to moan softly.

Todd deftly reached around to the catch of the bra and snapped it loose so that Joani's young firm tits popped out. He took one tit in his large hand and softly pinched the hardened nipple. He leaned down and put the other tit in his mouth.

Cari could feel her nipples harden under her pajama top. Todd forced Joani back on the bed, his face rubbing on her taut brown nipples.

Todd cupped one breast in his hand and his tongue licked slowly and softly across the nipple.

"Oh, I love it, Todd," Joani sighed as she reached down to the front of his jeans. For the first time, Cari could see the bulge in Todd's pants. Without stopping his tongue-licking of Joani's tit, he undid the zipper of his jeans and reached inside of his shorts and took out his stiff long cock, Joani put her hand on his cock. She moved her hand up and down.

Cari leaned against the closet doors, but she didn't take her eyes off the two on the bed. Wow, she thought, is that what a man looks like?

Todd pulled up Joani's skirt. He pushed it around her waist and kissed her stomach and lapped at her belly button. "Oh, honey, I need you tonight."