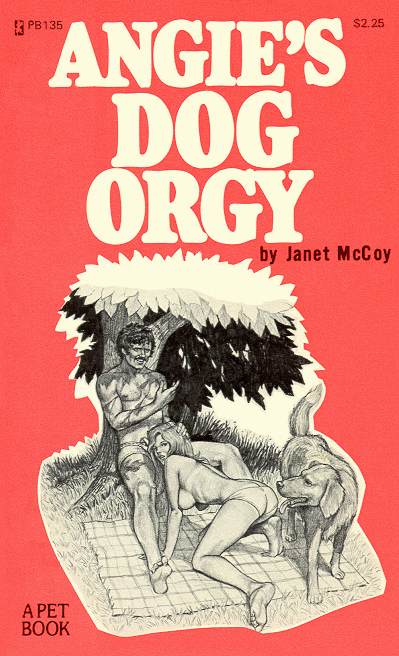 It was almost one a.m. The dance floor was crowded, swollen with an erotic jostling of squirming loins and legs and asses. Angie had been dancing almost nonstop for the last two or three hours. She loved dancing – it made her feel so alive, so sexy. It was dancing that let her express all the latent urges and frustrations that smoldered beneath the surface of her seemingly calm and self-confident appearance. She let herself go on the dance floor as she did nowhere else, sensuously writhing her hips and buttcheeks in their flesh-hugging trousers with the rhythmic abandon of a well-trained belly dancer. In fact she had taken belly-dancing lessons for a few months. But, like so many of her fleeting fancies, that one had soon fallen by the wayside.

At last the hot, urgent number that had been throbbing on for the last fifteen or twenty minutes, hypnotizing the dancers in their own private fervor of rock ecstasy, came to an end. Though Angie knew that her forehead was beaded with a light film of sweat, that her throat was parched, that her exhausted limbs longed for a moment's break, she remained standing, waiting for the next number to start, airily oblivious to the entreating looks of her tired partner.

Angie and her date, Dave Wagner, had exchanged scarcely more than a handful of words since they'd entered the nightclub. And that was just fine with Angie. She had had little enthusiasm for Dave's advances so far, but the handsome real-estate agent had been persistent so, equally bored with the prospect of an evening at home in front of the TV, Angie had agreed to come dancing. When she was dancing, it didn't really matter who she was with. She could enjoy herself just grooving on the hard, insistent presence of the music, her head empty of anything but the beat, her body leading an existence all its own, flying with the band, turning on to their wavelength – and moving.

From time to time she emerged from her private world to note admiring glances from the men dancing nearby. Their admiration gave her a feeling of power, of confidence. She didn't need them. She was operating on a plane far away from them. But still she enjoyed the titillation of their heated glances on her full swaying tits that moved freely under the thin covering of her Indian cheesecloth blouse, on her rounded ass grinding sensuously inside her clinging, modishly long jeans. She had left her shoes under their table, and even her bare feet on the cool dance floor felt incredibly sensuous as her toes gripped the tiles in methodical response to the beat.

The band had struck up another number, only this time it was a slow mournful ballad, the first of the evening. Angie was disappointed and turned to return to their table, deciding that this was as good a time as any to enjoy a drink and a rest. But before she reached the edge of the dance floor, Dave had grabbed her hand and pulled her back towards him, enclosing her in a tight embrace and a slow waltz rhythm. Resignedly she acquiesced, burying her blonde head in her partner's shoulder and gradually letting herself drift with this more subtle call of the music.

Dave Wagner had been waiting all evening for his chance to lay hands on the ripe, sexy-looking body that had been grinding so tantalizingly, so teasingly before his rapt gaze for the last several hours.

Jeez, she's a hot one, he'd said to himself, barely able to keep his hands by his sides as he surveyed the rounded lushness of her full boobs under her blouse. Obviously she was wearing no bra, but her tits still stood up firm and luscious, almost begging to be squeezed and caressed. When she'd turned her back to him and wiggled that tight swelling ass right at him, he felt a responsive jerk in the crotch of his pants. This woman turned him on, and no mistake, but she seemed cool, distant. He figured it would take a little of the old psychology to get into her pants tonight.

And the first step had been to get her into a close embrace, dancing slowly and gently with her held tight in his arms. He felt she could learn to trust him this way, realize that he wasn't going to attack her the first minute he got near her.

That would come later, once he'd got her nicely mellowed with booze and seduced into the plush confines of his lavish bachelor pad.

Angie began to sing silently to herself along with the music, her body swaying in comfortable harmony with the big man who held her so strong and close.