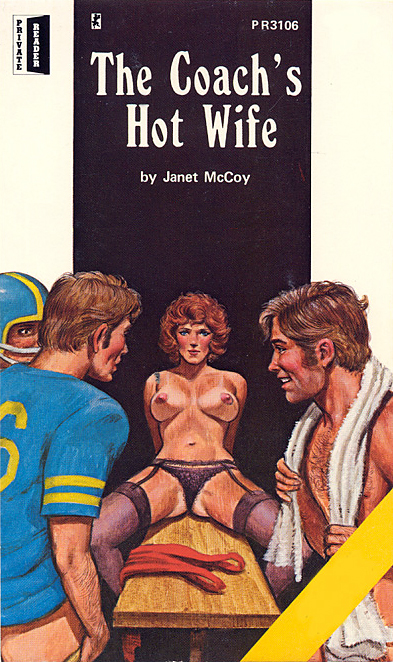 "Oh Steve darling! Your cock's so hard! It feels so good in my mouth! Mmmmm…"

They made a striking contrast. The boy, no more than eighteen, was well tanned and his thick hair was black as jet. The woman was in her mid-twenties. Her skin was the palest of unblemished alabaster. It was so fine and smooth; it was the kind of skin one can't help wanting to touch, just to see if it is real. Her hair was long and thick, a startling shade of red-auburn. It flowed over her back and the boy's thighs and belly as she labored over his erect cock. Her pink lips slipped up and down along his cock-shaft. They left behind them a coating of saliva that shone in the light that filtered in through the boy's bedroom window.

There was no doubt it was a boy's bedroom. A display of hunting knives hung on one wall. Pictures of major league football stars covered most of the rest of the walls, from waist level up. On the floor was a pile of clothing. On the very top of the pile was a pair of lacy pink panties.

The ass of the red-headed lady, like the rest of her, was bare.

"God, Miss Pope… that feels great!" His eyes were shut tight as he rocked his head from side to side on the pillow. His lips were drawn back tightly over his teeth. The resulting expression was an intriguing struggle between joy and agony. "Oh yeah… do it like that…"

She had speeded up her bobbing pace over the boy's cock. He began to thrust his hips up off his bed to meet the downslide of her puckered lips. His response seemed only to egg the woman on to greater efforts. Her ass ground wantonly in the air behind her as she struggled to serve well the blood-engorged cock in her mouth.

Excited by her abandoned words, she dropped her head once again over his cock. She took all of it deep into her mouth, pausing only when his cock-tip was pressing against the back of her throat!

The boy had opened his eyes. He watched fascinated as the older woman did rousing lip-homage to his tingling cock. Though he had felt her mouth on his cock many times before, he never failed to be intensely impressed by the zeal and the talent of the woman who was his father's private secretary.

Once again the boy gave silent thanks for the good fortune that often called his father out-of-town on business. It thrilled Steve to think how shocked his father would be if he had any idea what good care Miss Pope took of his only son. Steve often wondered that his father took Miss Pope so much for granted. She had been working with him at his home office and downtown for over five years. Steve was convinced that his father had even forgotten what a beautiful woman the redhead was. Whenever Steve saw them together, his dad was barking out orders and Miss Pope had her head bent over her steno pad.