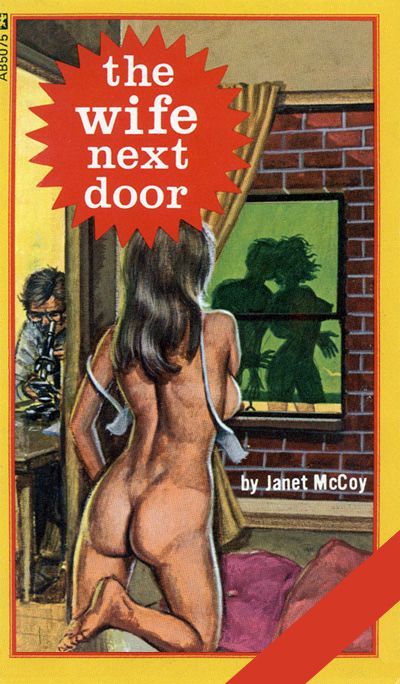 There was only one thing Sam Robbins liked better than fucking in general.

That was fucking his well-stacked wife Helen in particular.

He sat on a kitchen chair watching her go through the ritual of her Saturday morning chores. It was a luxurious feeling – to have the whole day in front of him, with nothing scheduled, with nothing more pressing to do than to watch the taut wiggle of Helen's ass as she rummaged under the sink for her Mr. Clean.

No doubt about it, he thought lustfully. I have got myself one hell of a good-looking old lady. He began to toy with the idea of impaling her right there. Of pulling down her snug little pink shorts and filling her ever-ready twat with a swollen seven inches.

The effect of his fantasy on his penis was impressive. It began to grow and throb under his bathrobe. Part of a day off for Sam was to sit around in his old robe, all day if he felt like it. It felt sexy to have his prick so close at hand. All he had to do was reach inside the fold of his robe.

While he caressed his cock gently, he watched Helen reach up to scrub the cupboards over the counter. The effort made her full breasts stand out invitingly and emphasized the long graceful sweep of her shapely legs. Helen was a tall woman, almost six feet. She was a good two inches taller than Sam. That was the way he liked his women – a good, substantial handful. Besides, he always joked with his friends, it made it a lot easier to fuck standing up when the woman was taller than the guy.

Sam began to fantasize pushing Helen against the fridge, pulling down her shorts and screwing her with her sponge still in her hand. His cock was feeling better and better. It had reached its full length and girth. It was getting impatient for some warm, wet action.

"What's going on in that mischievous head of yours?" Helen called back over her shoulder. "I don't trust you when you it so quiet." Her long thick red hair was pulled back into a ponytail. It bobbed saucily as she scrubbed.