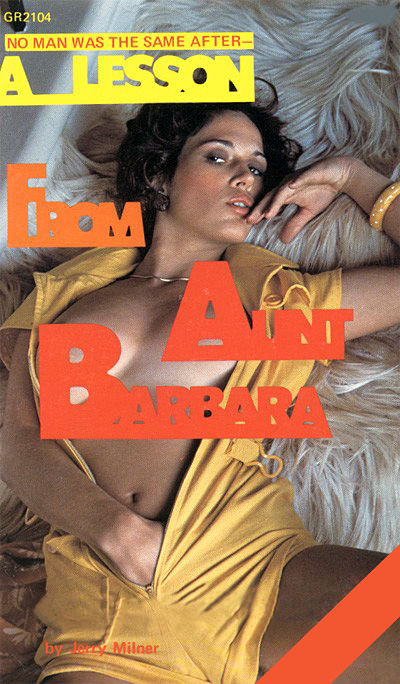 A lesson from aunt Barbara

A lesson from aunt Barbara

The nagging sensations deep inside her cunt began to register on Betty Sue Swensen's awareness. Part of the excitement, she knew, causing her juices to flow and the slick pouty lips of her cuntal mouth to flex warmly and flush deep red, was because she hadn't seen her sister, Barbara Jean Crocker, in almost two years, not since she'd gone to live with that airline pilot in San Jose. When she and Barbara had been growing up together back in the family home, they had had more than a sisterly understanding, and just seeing her red-haired sister, younger than Betty's forty years by nearly six, seemed to bring those wild passionate nights back in a rush, centering just beneath the surface of her feverish groin.

"For me, too, Betts," she said, noticing how her sweet sister's forty years had only mellowed her, softened out a few of her wilder, rougher edges. There wasn't a singe gray hair visible on her head, crowned by long flowing shoulder-length brown hair, the color matching her eyes. Both women still weighed about the same, though, one-hundred-and thirty pounds, but Barbara's five-foot-six-inches, shorter than Betty by two whole inches, seemed to make her look much heavier.

"When I heard that Johan had been taken to the hospital, I just had to come and be of whatever help I could to you and Erik."

"I'm so glad you could come, Barbara," Betty said, looking deeply into Barbara's starkly green eyes. "When I phoned you, I was so confused. I felt completely helpless."

"Well, dear, I'm here now," Barbara said, "so you can tell me all about it. What did happen, anyway?"

"They still don't know for sure, Babs," she said. "He was at work at the factory as usual, when he just collapsed. They rushed him to the hospital in an ambulance and sent for me. I called you from there, just after they'd let me see him."

"What does it seem to be, Betty?" she asked, looking concerned.

"They still don't know," Betty Sue said. "They're running all kinds of tests on him. It seems to be a blood circulation thing, blood being cut off to his brain. He was unconscious for hours before they revived him. It could take them weeks, they said, before they can pinpoint it exactly."

"And in the meantime, I suppose they'll just keep you dangling," Barbara said, smiling, trying to ease her sister's obvious anxieties as best she could.