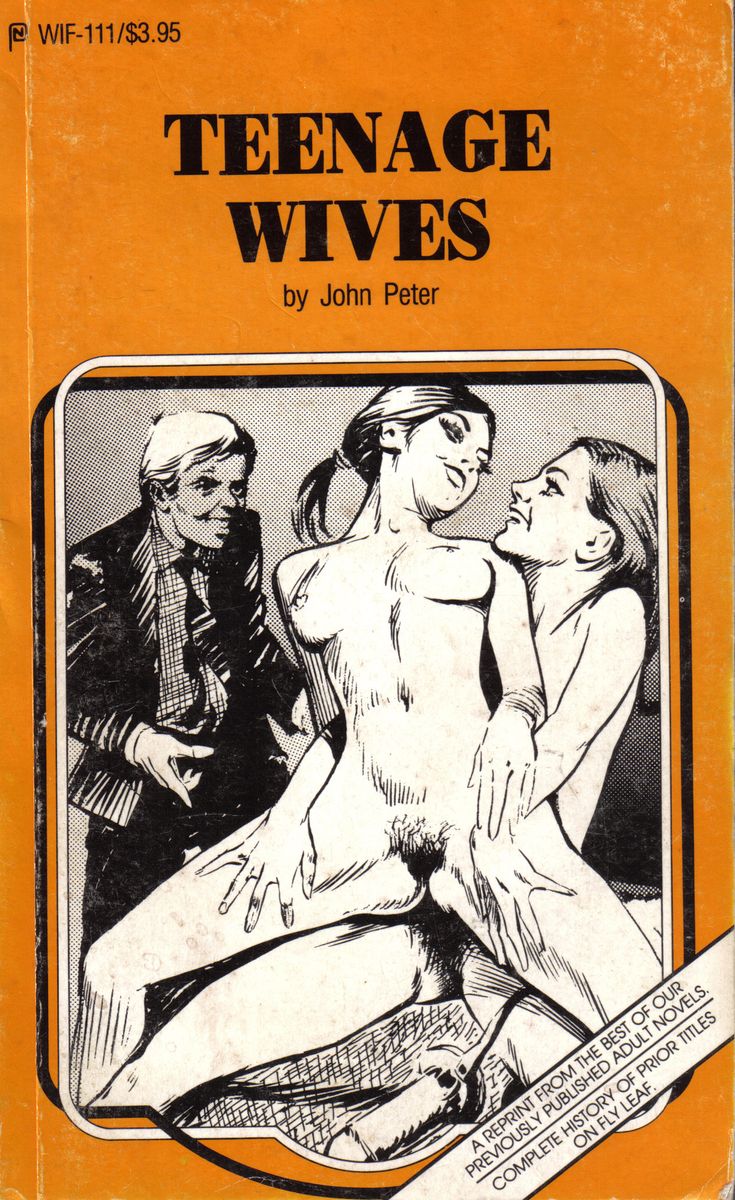 I: AN OLD FASHION VIRGIN

Seventeen year old Janet Tebbleton soaped her ring finger. It was the only way she could get the new wedding band off. The thing was a size too small for her, and she hadn't been able to get back to the jeweler yet in order to have it made larger. One good tug though, with the help of the slippery soap, and the ring came off. She set the gold band down in the soap dish and looked at herself in the mirror. Now she was completely naked.

She wondered if marriage had changed her at all, and that was the purpose of taking off everything, all of her clothes, all of her bracelets and necklaces and the ring. "Well," she thought to herself, "I don't look different, BUT…" The big "but" was on account of the fact that before she married Tom, two weeks before, she hadn't ever had sexual intercourse. She'd petted a lot, in the back seat of his car, and she'd been known to go out with more than one guy, and every now and then she'd allowed a fellow she liked to play with her little slot with his finger, but until her wedding night, she was a virgin. But now, as she inspected her tanned supple flesh in the bathroom mirror, she was far from virgin. Even though she'd only been married for two weeks, fourteen nights, she'd made love with Tom in what she was sure was every conceivable position. They'd done it standing up, sitting down, in the car, in bed, in the tub, in the closet, on the living room floor, in Tom's dark room at the studio, in her parent's washroom, in the apartment house swimming pool, and in just about any place you'd care to name. They'd fucked rightside up, upside down, on their heads, on their backs, on their bellies. Every time was better than the time before. Sometimes she could just think about Tom's big hog and that would be enough to make her sweet young pussy start to drooling. It was so good that she suddenly felt like she had something to live for.

Of course, the first night hadn't been all peaches and cream. No, indeed! It hurt her a lot. She thought she'd die when Tom stuffed that big hunk of penis flesh into her virgin hole. He nearly broke the ribbon with the first thrust. And she'd told him to go slow, too, but there was no stopping him. After all, he'd waited a long time, too, and it was mostly on her account. There was a lot of blood, probably more of that than pain from the big hot meat in her twat, and that was a little frightening. But after that, after that first bursting of the dam, as it were.. Well, from then on, she couldn't get enough of Tom's cock. Actually, she couldn't get enough sex. Period.

She didn't have any inhibitions about licking his joint, about sucking off the big red mushroom head, the spongy tip. She didn't mind licking out his anus or kissing his loins or sucking his balls. She loved it when he ate her, and she even started thinking about having his prick shoved up her asshole. She was willing, eager, to try just about every kind of sex that was possible. And two weeks, fourteen nights, hadn't been nearly enough for her.

But Tom had to go back to work, and the honeymoon, whether Janet liked it or not, was now over. And she'd decided to take a quick look at herself in the mirror. So she stood in the bathroom with her ring finger naked for the first time in fourteen days, and she inspected her body. Her smooth pendular tittles hung down full and ripe as ever. Of course, there was a small heart-shaped hickey on one of her tits, but that didn't matter so much. As a matter of fact, she rather liked seeing that little red splotch there on her otherwise tanned chest. It was like a medal, a love medallion, a lovely little temporary scar, which indicated that she'd been through something. Except for that, and of course, except for the fact that ever since that first night of fucking her titty tips, her big nipples were always on end, she could see no change in her body.

Janet turned sideways in the mirror and took in her profile. Her breasts hung outwards and down. They were full and smooth, nicely sculpted. Her hips were trim and smooth, and the only parts of her body, which were pure creamy white, were her buns and a narrow strip of pelvis. She'd been sun bathing in the nude on the honeymoon in the Islands, and she'd been more than willing, as Tom had requested her to, to bathe nude except for the bottom of her bikini.