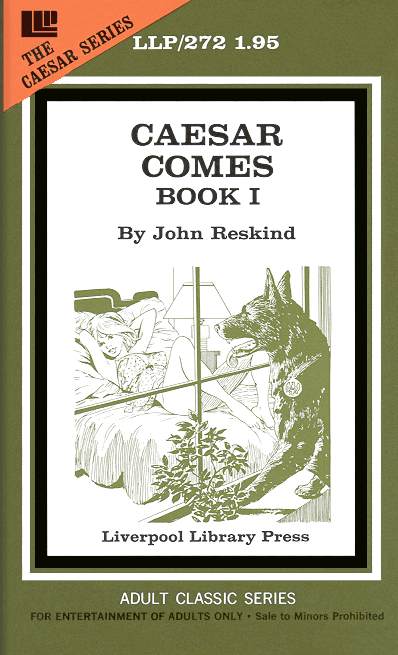 Thunder rumbled with foreboding violence somewhere off to the west above the lush, surrounding hills of the valley. Yet, stars twinkled now and then in the warm, summer-night sky where the patches of gathering clouds didn't obscure them. A pale half-moon outlined the small town's hushed streets when the sweeping masses permitted, determining century-old, framed houses and great, gnarled elm-trees lining the ways. A white, wooden church-steeple that had stood in Crescent Valley since its founding some five-score years passed, dominated the heart of the settlement.

It was late, nearing midnight, and the town square, along with its two-blocks of locked business establishments, rested in the feeble, silent glow of sparse street-lamps and occasional neon tubings of vivid reds, greens and blues. A distance off in the hills, an animal, a stray wolf perhaps, wailed an eerie howl that carried across the uneasily sleeping valley. Then, the unmistakable sound of rhythmic footfalls against pavement grew louder, shattering the ghostly stillness. By the dim, artificial light, one could make out the trim figure of a young girl moving rapidly as she hummed to herself in a timorous voice and turned onto the darkness of Cypress Street, purposely ignoring the far-end of the square where the town hall loomed. Immediately, her tiny feet began to gain in tempo.

Lightning, but not of the jagged, bolt variety, momentarily illuminated her night world as she walked with increasing speed along the nearly pitch-darkened street toward her home. Her young mind was not at ease and she hummed as if to deny that to herself. She was thinking that her Uncle Link could get quite up-tight when she stayed out after eleven… and it was almost midnight. But they'd been having such a good time dancing and talking that she'd truly forgotten about the hour. She hoped that he wouldn't be waiting for her… and if Nell Carter was there he wouldn't be… that was a near certainty. She could well surmise what he would be doing with his bleached housekeeper from L.A…!

The lightning flashed again, startling her, following by the vibrating roll of distant thunder. It would storm tonight, she thought. Last night it had nearly broken when she'd accompanied Uncle Link and the men on their frantic chase after the wild dog pack. She hadn't wanted to go, but he'd insisted. She was an expert rifle marksman and a capable horse-woman, prime requisites when the sheep were being threatened. She'd had no choice but to go, and God… she would never forget it! The way her uncle had clubbed and tortured that wild, fawn-colored female dog! What a beautiful animal she had been, too, and almost ready to whelp. It sickened her now as she remembered the vicious manner he'd used to beat the beautiful animal rather than shoot her. Some of the men had actually cursed him…

"Dammit, shoot her, Chief! You don't have to torture the bitch that way…!"

But for a few minutes he'd been like a maniac, as if he'd lost all control! There'd been no stopping him; he'd hardly heard a word any of them shouted at him.

"Shut up, you damned fools!" he'd roared at them, clubbing the wailing crippled animal, but only hard enough to break its bones and not kill it. "You want your Goddamned sheep raided night after night… or do you want to put an end to it? Well…? This is the way to do it! The rest of that pack has got to hear her cries! That's the only way to drive them off… throw the fear of man into them…!"

Maybe, he had been right, she didn't know, but the ordeal had affected her as nothing before in her teenaged life. Even in the despicable hatred she'd suddenly felt toward him while he was cruelly killing the dog, certain sensations of incredible excitement had filled her, causing her young body to tremble and cover with chilling goose-flesh. God, it had been weirdly exhilarating! Yet, only moments before as she'd waked through the square, she had kept her eyes averted from viewing the poor dead thing where she hung on the flagless pole in front of the town hall. There was something about her uncle's hanging of the animal's senselessly broken carcass there that nauseated her, but once again he'd insisted that the wild pack would know and stay clear, that the massive German Shepherd which led them would understand "in his devil's soul that he'd met his match…!" Yes, he was probably right… violence seemed to be the only way in this world…

Split seconds of brightening flashes again made familiar surroundings discernible and Annie Purcell, sixteen-years old, hummed louder to herself as she quickly tripped along toward her Uncle Link Morgan's home, unaware of the avenging eyes intently watching her approach. Had she been closer when the skies briefly glowed she might have caught the glistening reflection from the gold medallion that hung from a chain at the throat of the huge German Shepherd dog. She might even halve seen the figure of an eagle embossed on one of its sides, or the ancient Roman centurion on the opposite… or perhaps, the name inscribed in circled letters: Caesar…!