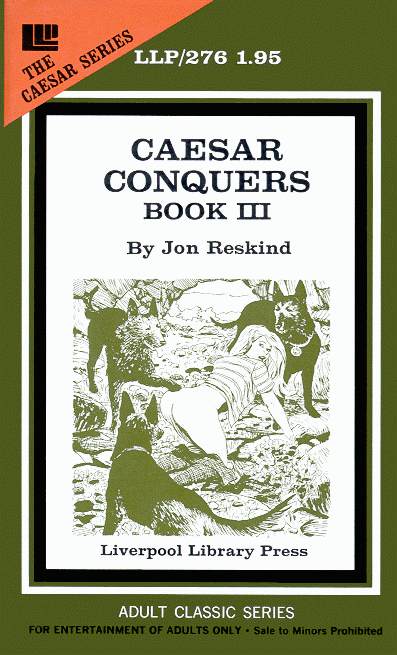 A wave of astonished disbelief swept through the big, well-proportioned frame of Deputy Sheriff Mark Blakely as he stood in the hallway of his small home staring beyond the partially opened door into his bedroom! The pair of naked, curvaceous young women lying obscenely curled together on the rumpled bed were totally unaware of his presence. An expression of utter incredulity distorted his handsome, chiseled features, his appalled grey eyes riveted on the wanton spectacle his voluptuous blonde wife and her vivacious, long-time friend presented in the obvious throes of sensual exhaustion!

Christ, was it possible… or was he losing his buttons altogether? His young Jeannie's whitely ovaled buttocks flagrantly faced him in their fully rounded nakedness, and there was nothing imaginary about that! It was bare fact! Her long shapely legs still spread in satiation provided him a bird's-eye view of the wetly glistening ribbon of pink, intimate flesh separating the moistly swollen lips of her golden-curled vagina! And there was nothing hypothetical there either, nor in the viscid moisture coating the smooth white flesh of her lush inner-thighs, damply reflecting the soft lamp-light in undeniably lewd evidence! It all lay before him in the absolute, the lurid sight sucking a nauseating vacuum at the base of his stomach!

The shocked young husband reached out to grasp support of the door-frame, sensing the firm arousal of his penis he'd hurried home with, slowly softening and buckling in the middle, the lusting thoughts he had entertained concerning his young wife of two months taunting him, as if they had suddenly assumed leering faces of lesbian mockery! He watched a sensuous tremor ripple over the nakedly curved loveliness his Jean possessed, saw her brush her long blonde hair away from her face, then inconceivably graze her cheek lovingly up between Carol Foster's open thighs and rub against the moistly saturated pubic hair!

Jesus Christ, maybe the Goddamned world was coming to an end, too! That would be as feasible as seeing Jean lying with her beautiful young face lewdly nuzzled to her girlfriend Carol's dark, hair-fringed pussy, her luscious lips, delicate chin, and tiny nose-tip still wet from the apparent moisture of the willowy brunette's openly spread vagina! His Jeannie… my God… it must have been the blow on the head from the accident! What else…? Carol up between her legs…! Christ, she just couldn't be a… lesbian… Could she? Or… or could she…? Goddamn, after all he'd seen the past week, just about anything was possible!

He gaped at Carol, his writer-friend's blithely stunning young wife, lying obscenely spread wide on her back, her firm well-shaped thighs salaciously open while Jean nestled her passion-moistened face against the damp softness of their house-guest's languorously offered cunt hair! With a head-shake, Mark sought to rid his brain of the incredibly lurid nightmare, but it didn't go away; he was wasn't dreaming! If… if he'd been minutes earlier, what the hell would he have seen then? Oh shit… there had to be a logical answer… the accident… was that it? He didn't know about Carol, but the blow Jeannie had received on her forehead the night before in the car accident; it was the only logical explanation! His mind reeled. And where the hell had she been last night? He hadn't been able to find that out yet, either…! Couldn't let Steve know about this… the poor bastard, out there risking his life riding down a wild story with that crazy, drunken hunting posse…!… Had to keep his Goddamned head… slip back to the front door and slam it as if he'd just come in… seen nothing… somehow forgive her, forget it ever happened…!

That, Mark would painfully have done, convinced that rationality with diplomacy, preposterous as it seemed under the loathsome circumstances, was the only immediate, discreet move for all concerned… He started to back off, then caught himself short when all of a sudden Jean began to shamelessly slither her voluptuous curves up over Carol's openly receptive body, the brunette's arms encircling his wife's neck as their full, firmly shaped breasts crushed nakedly against one another, their mouths fusing hungrily together in a heated, tonguing kiss!

Their panting little sighs of sensual fulfillment reached him, sending a renewed charge of disgusted rage seething through his big, tensed body, destroying any vestige of sanity he had struggled to hold on to! Homosexuality in any form had always sickened him, but this perverted affair… his own wife… and right in his own bed! Fuck!

He reached for the support of the door-frame once more, sensing his heavy cock solidly re-swelling with a non-reasonable on-rush of fresh blood! The lust-inciting scene of their seductive white bodies squirming nakedly against one another, satin-smooth flesh buoyantly yielding to erotically squirming flesh, was more than he, in his violent indignation, could restrain! He couldn't help but ogle the firing revelation of Carol Foster's supple, unclothed body, not unaware that it existed; but actually seeing it so lasciviously and nakedly displayed for the first time clawed feverishly at his loins!

Bitches! All the rationalization in the world he might summon would never eliminate the obscene picture their forbidden embrace etched in his fuming brain, nor the sheer, vengeful lust mounting from it! Goddamn them! Why not… an eye for an eye… and that's a game any number can play! He'd come clean with Steve after he fucked his hot little wife, shitless, too! He'd stake his ass that the poor bastard was as much in the dark about this as he'd been! Hell, he'd even suggest that Steve fuck Jean anyway he liked, if he wanted to, the vindictive young husband blindly reasoned! Why not? There was damned little that was sacred anymore…!

The young police officer half-staggered into the room, but the pair of passion-involved girls were still unaware in their whispering intimacy. They squirmed hotly against each other in their infused nakedness, breasts to breasts, soft bellies writhingly meeting, the fully rounded mounds of Jean's whitely undulating buttocks quivering and rippling as she feverishly ground her wet loins down against those of the spread-thighed Carol beneath her! To this unrestrained exhibition, Mark lustfully pulled at his clothes, feeling almost drunk without benefit of a drink in the bitter sexual arousal that had vengefully overwhelmed him!