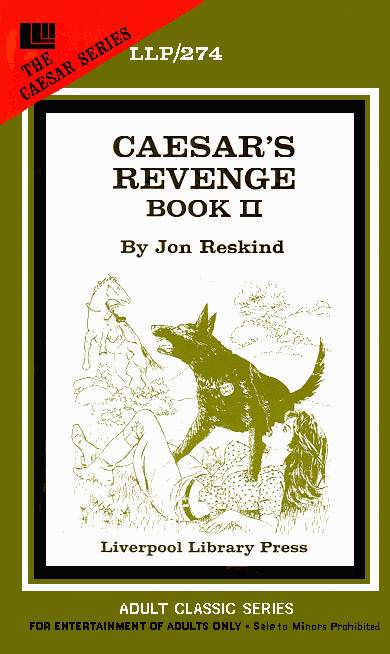 It mattered little to the sleek and powerful german shepherd dog that the small town's streets had been brightened with additional lamp, lantern, even fired torch-light. He merely clung more stealthily to the inevitable shadows of the warm summer night, avoiding with ease the clumsy patroling male-humans who sought to destroy him. A balanced sense of avenged pride burned warmly in his deep muscular chest; he had punished them for the brutal, torture-death of his mate, satisfying the ancient law cryptically imbedded in his uncanny animal-brain… lex talionis… the law of retaliation. Yet, in so doing, he had rekindled the banked embers of another smoldering force from ages passed, a seething aberrant urge that had brought him down from the hills again this night.

Caesar stole his way in a surreptitious silence equal to the very shadows enshrouding him, knowing exactly his destination, the craving dictate in his feral loins magnetically guiding him. Cautiously, he moved his great head in searching sweeps, aware through instinct that the gold medallion hanging from his throat on its glittering chain could attract attention in the light of the moon. Ahead, he saw the shelter where she would be lying on the human sleeping place, the golden female-human he had chosen to replace the mate they had cruelly killed.

A feverish heat spread through his huge, invincible body at the glow coming from the opened window. She was waiting for him…!

The surge of wild mating instinct motivating the massive dog caused his long tongue to lick out ravenously at his lips, while his mighty animal-loins convulsively reacted in pulsating throbs. Deliberately, but with vigilance, the illusive, canine beast crept toward the open window, a sudden piercing howl back in the hills advising him that his pack was racing down toward the valley in its quest for food…

The willowy, ivory-skinned girl who tossed herself nakedly onto Jean Blakely's bed, sensed a certain feeling of imposition at her friend's relinquishing their bedroom to them. Mark, too, had insisted and of course, her own numb old Steve had merely said "thanks". The dodo… all he was concerned with was getting a story for that lousy magazine he slaved for, not giving the slightest thought to Jean and Mark's inconvenience. Then off he goes, chasing down the utterly ridiculous tale that had brought them there. Not that she hadn't expected to be a writer's widow throughout most of their stay in Crescent Valley, but she'd had hopes that this, their first night there, would be spent together… especially following her monthly five-day abstinence because of her period.

God, she was always a lusty little hot-box right after, wasn't she? Carol Foster racily thought to herself, wriggling the naked roundness of her full white buttocks in a little sensuous undulation against the smooth satin give of the sheeted mattess. A tiny shiver of erotic delight tingled along her spine. Reflexively, she brushed her long slender fingers with a light touch over the diffused, resilient flesh of her full, white breasts, absently teasing at their tiny, ruby-like nipples until they were incited buds of sensitive hardness. He could have at least waited until morning; she'd certainly dropped enough hints all evening long. She thought this as she lay there uneasily in her aroused nakedness, the soft glow from the bedside lamp playing over the smooth curves and hollows of her young, supple body, heatedly adding to her sensual appetite.

Of course, the drinks hadn't done anything to cool her down either, especially the last two she'd had with Jean after the boys had left on their crazy, wild dog-pack-hunt. But she'd needed them; she'd been so damned mad when Steve had told her he probably wouldn't be home until morning. Such absolute nonsense… the whole ludicrous yarn… a wild dog raping a girl…! It surprised her that an intelligent man like Mark Blakely could take any stock in such an absurd story… and he'd looked so damned grave, almost avoiding Steve's questions. Even Jean, after they'd left, had practically refused to discuss it, continuously changing the subject. Frankly, she'd been just as satisfied, Carol remembered, half smiling to herself, any reference to sex doing nothing but turning her on that much more.