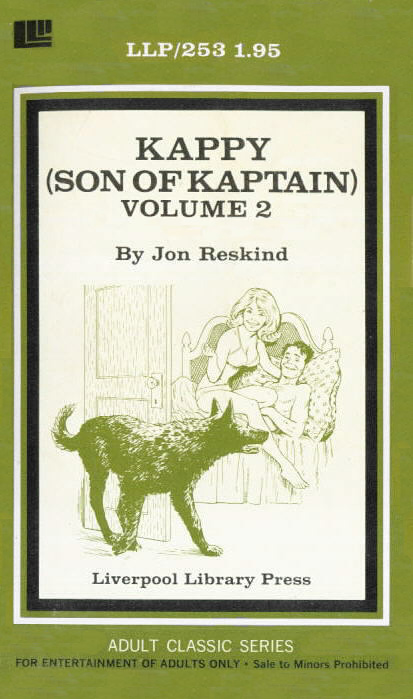 Not even the drab gray Detention Home uniform she wore could hide the lovely, honey-blonde haired girl's young voluptuous curves as she walked along the dingy corridor ahead of the ugly-faced Chief Matron. With striking, wide green eyes alertly acknowledging unspoken words of encouragement from sister inmates framed in the barred openings behind locked cell doors, and with the firm little chin of her angelically beautiful, teenaged face held proudly high, Jean Wilson moved with a defiant, almost haughty gratefulness that neither the corrupt institution nor its depraved keepers had been able to strip from her in the short period she had been imprisoned.

Her wealth of long golden hair tumbling about her softly sloping, feminine shoulders created a vestal-like aureole belying the sensuous enticement of her high-set firmly thrusting young breasts and the gentle, provocative sway to her smoothly rounded hips and buttocks, and she was not unaware of the burning, lecherous eyes of her keeper hungrily undressing her from behind as she walked. She had already been schooled by her cellmates, Sandy Jarvis and Carla Montez, as to the lustfully perverted character of the ugly-faced, middle-aged woman. But, as her young informers had advised, the chances of falling, or being "tossed", into the woman's hands were small as long as one pleased the Madam Superintendent and her equally lecherous, handsome spouse, the state Director of Correction, a horrifying plight that both she and her young husband, Ken, had already been subjected to.

In fact, at that very moment, Jean's unemotional expression was but a facade hiding the inner turmoil of fear, degradation, and heartbreak that had raged constantly within her since her awakening from the drugged stupor Maggie and Max Keele had forced upon both Ken and herself only days before. She could still barely comprehend the obscene sexual abuses they had been slavishly made to endure at the hands of an evil group of older men and women called the Spaxtons. That their tormentors had been wealthy and influential state officials of prominence only added to her sense of helplessness; yet, as morally shattered and fitfully despondent as she was, the determination to fight and resist them still burned intently within her curvaceous young body, and to all outward appearances she was far from being the mind-broken sexual tool the stunningly beautiful Maggie Keele made of her unfortunate inmates.

"This way, Wilson," the big boned, heavy breasted Matron known to Jean only as Seybor ordered, guiding her onto an elevator with a painful knuckle in the small of her back. "And I'd advise you to drop that snooty, stuck-up chin of yours a couple of inches before you walk into the Super's suite. You ought to have learned by now that she doesn't take kindly to smart-assed young pussy like you, oh?"

Jean made no motion of acknowledgment to Seybor's lewdly phrased statement, though she was well aware that what the coarse woman had said was all too true. Whether it was a youthful envy, or plain sadistic degeneracy on the part of the statuesque Superintendent, she didn't know and hardly cared. Her one concern was, and had been, since emerging from her drugged coma, only of her twenty-year-old husband, whom they had framed on false drug charges as they had her, then had committed to a prison upstate. Because of her age, seventeen, and for obvious other reasons befitting their lustful desires, Maggie and Max Keele had seen to it that she had been put in the Home.

God, she could still hardly believe the deplorably sordid course of events which had placed her on that elevator ascending them upward to the raven-haired Superintendent's personal suite… another impregnable den like the Keele private home some five hundred years from the institution. A shudder of cold apprehension rippled over Jean's soft, satiny flesh beneath the plain, unattractive uniform. She had no idea why the austerely ravishing official had taken such a dislike to her from the very beginning, when she and Ken had been ordered to serve out their probationary sentences as domestic servants in their private home. But she unquestionably had… and then had seductively coerced Ken into illicit sex, while the handsome Director had raped… or at the very least, blackmailed her into a wantonly shameful sexual performance she would never be able to wipe from her memory, any more than she would the unbelievable bestial acts with their dog, Kappy, that she had been a part of later on…

"You know, Wilson, if you'd just smarten up a bit and be nice to the right people around here, you'd have it made," Seybor suggested, interrupting the exquisite blonde teenager's anguished thoughts, a lurid half-grin playing around her homely, thin-lipped mouth.

Immediately, a feeling of repugnance washed through Jean's tremulous belly at the obvious meaning of the big Chief Matron's advice, but she tried to ignore it. All the same, it brought to memory the way she had run from the bedroom of Maggie Keele that night of the terrible Spaxton meeting when the Superintendent, enticingly naked, had nearly mesmerized her into a revolting lesbian act… and this, too, Jean realized, the stunning official had not forgiven her for. She couldn't help but wonder with that abominable experience plaguing her, why the woman had sent for her, or what dreaded thing lay ahead…

Abruptly, her thoughts were once more severed as she felt the hot, heavy hand of the homely Matron smooth caressingly over the soft curve of one rounded, resilient buttock, and every muscle in her young voluptuous body tautened abhorrence. Her reflexive action was automatic as she pivoted and slapped the older woman sharply across the face.

"Damn you! Don't you ever put your filthy hands on me again!" Jean spat through clenched white teeth.